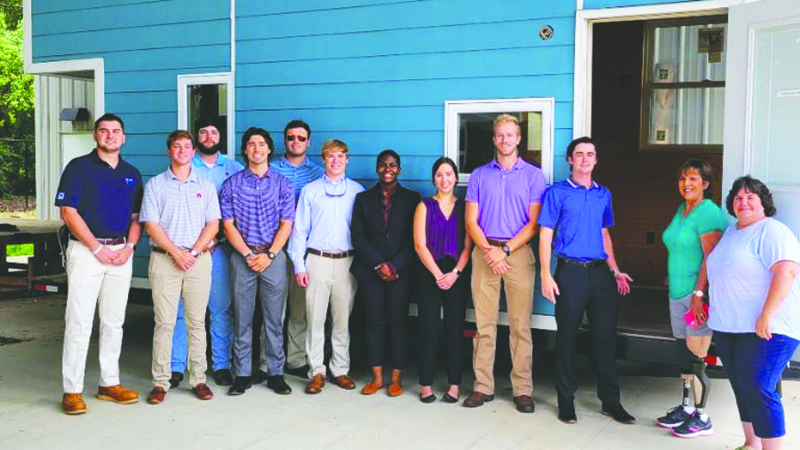 The first of multiple small houses built by the Auburn University Building Science Department has been completed. --Wayne Clark

LANETT — Kim Roberts and Robin Pierre of the Chattahoochee Fuller Center Project (CFCP) will be traveling to Midland, Pennsylvania, to meet with members of the Bunkertown Brethren Church this week to thank them for their support of the CFCP.

Led by Barry and Amy Stuck, some 20 members of the church will be in West Point the first week in October to build two new CFCP homes on Higgins Street.

On Saturday, Roberts will be speaking to a men’s group from the church. They will be building a set of walls for CFCP Home No. 65. The church members have rented a semi to transport the walls to West Point.

A set of walls for the other home were built earlier this summer by youth from Minden, Louisiana. In mid-July, a group of 44 teens and youth leaders from the First Baptist Church of Minden came by bus to the local area to build 42 sets of walls that will be going in CFCP Home No. 66.

Latrisha Finley and Asia Hoffman will be the new homeowners.

The CFCP has had a jam-packed summer. In addition to getting ready for some new home building this fall, Roberts and Pierre have headed up a home renovation project for a long-time Lee County resource officer who was recently disabled by a stroke. They have also been working with the Auburn University Building Science Department on locating two new tiny houses in the Plant City community.

“We are excited about all of this,” Roberts said. “We hope to have the tiny houses on-site in September. The houses aren’t big but could be ideal for a single person or a couple.”