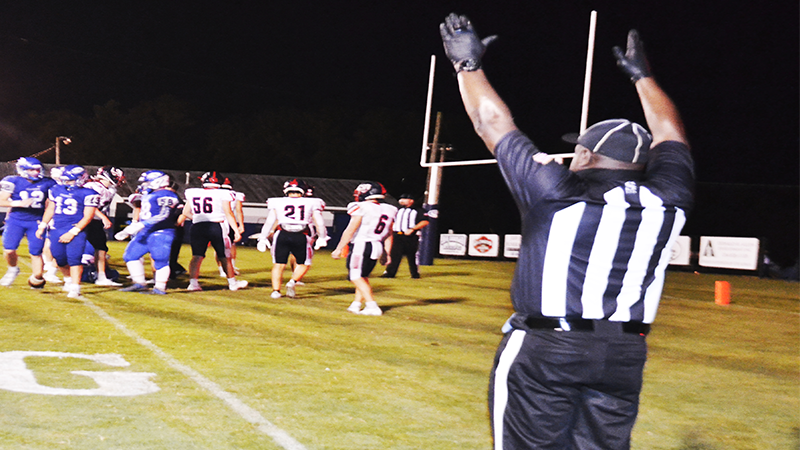 The Rebels blasted the Lee-Scott Warriors 41-3.

Jo Jo Hendrix played well in his first game as the team’s starting quarterback, Jordan Benbrook had an outstanding game in running the ball and fleet receivers T.Y. Trammell and Jeremy “Spud” Conway used their terrific speed in making some big plays near the sidelines.

It was a milestone win for Coach Jason Allen. It was win Number 150 in his coaching career. Most of those wins were at Chambers, but some came when he was the head coach at Glenwood.

The family of fallen Rebel Holden Messer were recognized in a pre-game ceremony. A contributing member of last year’s state championship team. Messer was killed in an ATV accident earlier this summer. Neither team could move the ball on their opening possessions, but Chambers got rolling the second time they had the football. With Hendrix leading the way, they went 78 yards for the first score of the young season. It looked like they would do it in one play when T.Y. Trammell got loose around the right side and raced to the north end zone for an apparent score. Much of the yardage came back on a block in the back penalty on the play.

That put it back on the Lee-Scott 38. The Rebels continued goalward from there, mainly on the running of Benbrook. John White had a big run to get Chambers inside the 10, and it took Benbrook just two carries to get the ball in the end zone. Cayden Haley’s point-after made the score 7-0 in favor of the Rebels with 4:56 left in the first quarter.

Some good plays by Kross Colley and Zach Bylsma frustrated Lee Scott on their next possession, forcing another punt. Chambers put the ball in play on their 32 and marched 68 yards for their second score this time. On a third-and-two play at the 40, Benbrook found plenty of running room off the line’s right side, advancing the ball to the Warrior 41. On the next play, Conway took a pitch around the right side and sped down the far sideline for the game’s second score.

The PAT was wide right, leaving the score 13-0 at the 4:56 mark of the opening quarter.

Lee-Scott mustered what would prove to be their only scoring drive of the game on their next possession. Quarterback Tate McKelvey led them down the field, making some key conversion plays on third-down runs. Chambers helped them along the way with some uncharacteristic penalties.

On a third-and-five play inside the 10, the Rebels held them to a short gain on a running play, forcing a 25-yard field goal attempt which the visitors made. With 5:30 left before halftime, the Warriors were back within ten points, 13-3.

But it wouldn’t stay that way for long. In one of the most exciting plays, T.Y. Trammell fielded the ensuing kickoff near the middle of the field on the 10-yard line. He went right, picked up some good blocks along the way before finding a clear field in front along the home sideline, he easily made the south end zone. That made it 19-3. The Rebels added two more points on the conversion when Benbrook lined up in shotgun formation as the quarterback and powered his way into the end zone off right guard. With 5:14 left in the half, Chambers led 21-3.

The Rebels got one more score before intermission. They drove the ball 59 yards, with the big play being a pass to Trammell on a second-and-20 play on the Chambers side of the field. The Hendrix-to-Trammell pitch play on the left side of the field advanced the ball to the Lee-Scott 16. From there, it took just three running plays to make the end zone.

Benbrook scored from two yards out with 21.7 seconds left in the half to make it 27-3. Haley’s PAT closed out the half with Chambers ahead by 25 points, 28-3.

It was more Rebel domination in the second half. Chambers added two more scores and kept the visitors off the board to win going away 41-3. The scoring plays came on long runs by Hendrix and Benbrook.

Benbrook finished the game with 157 yards rushing and three TDs. Trammell had four catches for 32 yards.

Leading the way on defense were Kross Colley and Hunter Burdette, each with 11 tackles. Gavin Kight had 10 stops and Zach Bylsma eight.

Chambers will take to the road next week, taking the long drive to Abbeville, Alabama and a game with Abbeville Christian. On Friday, September 3 they will be back home with the cross-county rivalry game with Springwood. Some special events are in the works for this year’s game.