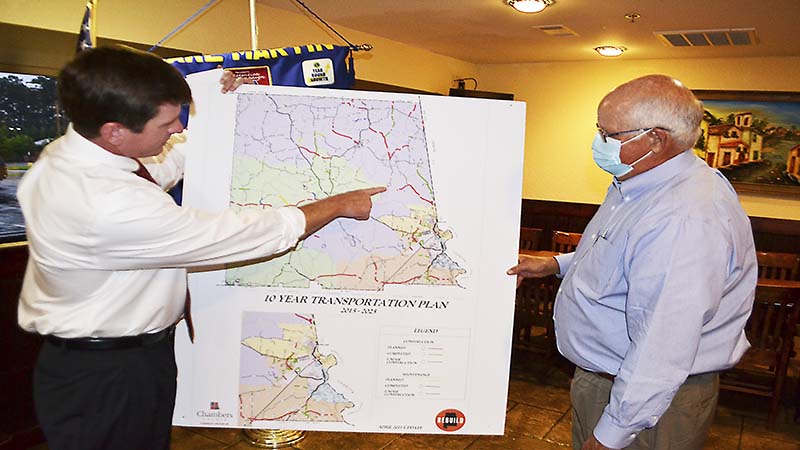 VALLEY — At the Monday meeting of the Valley Lions Club, Chambers County Engineer Josh Harvill gave members of the club an update on current road improvement projects taking place in the county,

He credited the Chambers County Commission with the foresight of adopting a 10-year plan listing priorities on road and bridge projects. Approximately 42.5 miles of Chambers Connty roads have gotten needed work through that plan. Some federal funding has helped this process.

There’s a major opportunity, Harvill said, to get federal funding for projects that are related to driver safety. He cited a place County Road 289 between Lakeview and Fredonia that saw some much-needed improvement in the last year. A stretch of road just north of the Quail Run subdivision had been the location of numerous traffic accidents over the years. A curve was straightened and part of the road was raised close to one foot. Some 90 percent of the funding for the project came from the federal government.

“Straightening a curve can help prevent accidents,” Harvill said. “It can take only a split second from someone who gets distracted for some reason to run off the road. Shoulder work can give people more reaction time if they do that. There’s no price you can put on saving someone’s life. If we can do that through road improvements, it’s the best thing our department can do.”

The county has invested an estimated $4.6 million in road improvements over the past five years.

Governor Kay Ivey’s Rebuild Alabama plan is helping tremendously. It brought in a little more than $455,000 last year for Chambers County and is expected to bring in an estimated $680,000 this year. The total should top $820,000 in 2022 when the full 10-cent gasoline tax is in effect.

“It has provided us a big infusion of funding for us,” Harvill said.

“We do both large and small projects with the ad valorem taxes we receive. We can match that with federal dollars.”

Rebuild Alabama provided the lion’s share of funding for the construction of a new bridge over Waterworks Creek between Fredonia and LaFayette. Harvill said the bridge is currently open to local traffic only.

“We still have some work to do on the approaches to the bridge,” he explained.

County highway department crews can be almost anywhere in Chambers County on any given day. They have been working recently on a road south of LaFayette. An estimated $75,000 in paving will be taking place on that road. County Road 153 north of LaFayette will be getting some work along with roads near Ridge Grove and Rock Fence Station.

“We are trying to do more roads and to get our tax dollars to go farther,” Harvill said.

A major upcoming project will be the long-awaited plan to install turn lanes at the intersection of Phiilips and Cusseta roads near Huguley Elementary School. This project should fall within the $2.7 million to $3.3 million range. Approximately $800,000 has been spent in the last few years to move underground utilities such as water and natural gas. The project will also involve some new traffic signaling, striping and some new curbs and gutters. At the approaches to the traffic light, there will be new turn lanes in all directions. The longest one will be on the portion of Phillips Road that heads north. Part of this road from Exit 77 on I-85 is already four lanes. This will turn into three lanes near the bridge over the CSX rail line and proceed to the traffic light.

“The state gas tax really helps with projects like this,” Harvill said. “If it costs us $3 million to do this on Phillips Road, imagine what it will cost to put in new lanes on an interstate highway.”

Harvill said it might be a good idea to stay away from the construction zone for the next year. He said he was especially concerned about the log truck traffic going toward Norbord during this period.

“Phillips Road is a high volume traffic road, one of the busiest in Chambers County,” Harvill said.

Another major project is the replacement of a bridge over the Norfolk Southern rail line near Waverly in the county’s southwest corner. It could cost more than $1 million to get it done. Harvill said the bridge is in a very scenic location.

“It’s near the Stephens Mill Pond,” he said. “It’s a really beautiful place.”

Harvill said that every project is different.

“Some roads will take a couple of months to fix,” he said. “Others can take much longer.”

There’s an ongoing project to trim tree limbs along the roadsides. It’s already taken place on the State Line Road, Kilpatrick Road, Johnson Chapel Road, Fredonia Road and soon will be taking place on CR 278, which runs from LaGrange to Roanoke.

Harvill said that Chambers County is in need of talented young people to come to work and make it a career. The average age of tenure right now is six years.

“We need to figure out a way to keep people here,” he said. “We are trying to get competitive in terms of the pay.”

The Chambers County Highway Department has a total of 440 miles of paved roads, 330 miles of dirt roads and 150 bridges it’s responsible for.

Decisions on what roads and bridges are addressed are based on traffic count, the immediacy of need and getting the greatest benefit for what funding is available.

A complaint Harvill often hears is that “It’s great you are doing this project or that project, but when are you going to fix the road in front of my house?”

“All roads need to be safe,” he said. “We will continue to cut the grass and blade the roads all over the county. We will do all we can for our roads and bridges to be as safe as they can be.”