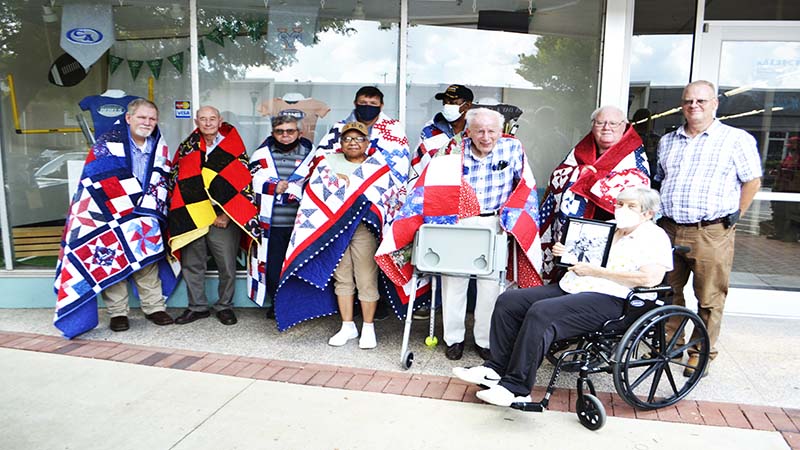 WEST POINT — Eight veterans from the east Alabama-west Georgia area were honored for their military service at a Quilts of Valor program hosted by the Georgia-Alabama State Line Chapter of the Quilts of Valor at sewingmachine.com in downtown West Point Saturday morning. The group included five people who served in the U.S. Army, two men who were with the U.S. Air Force and a former Marine. One served during the Korean War and two in Vietnam.

The Korean War veteran being recognized was William “Bill” Frazer of West Point. He served in the Air Force from 1950-55. He was accompanied to the presentation by his wife, Maxine, and daughter, Traci Martin. Mrs. Frazer had a framed 8×10 photograph with her she is quite proud of. It shows her husband when he was a young man standing on a rocky hillside in Korea. He’s smiling broadly in the picture and strapped around his neck is a camera. He’d later take many photos of children and grandchildren with that camera.

“We have them all over our house,” Maxine said.

Frazer was drafted in 1950 and joined the Air Force. He said he’d never forget standing on the deck of a ship as it passed through the Panama Canal on his way to the Far East. Frazer said he lost some close friends who served with him in the Korean War. One of them is still listed as missing in action.

The Vietnam veterans include Jerome Patterson of West Point and Dallas Pearson of Greenville, Georgia. Patterson was in the Army from October 1968 to October 1971. He saw service in such locations as the Tan Son Nhut air base near Saigon and the Cam Rahn Bay air base. He spent time with two famed units: the 82nd Airborne and the First Infantry Division. Patterson said a good friend of his talked him into serving in the military. He said that he has no regrets about his service to his country.

Pearson today lives in the Stovall community near the Meriwether/Troup County line.

“I always tried to do my best when I was a soldier,” he said. “I have no regrets about being in the Army during the Vietnam War. I thank you quilting ladies for what you do, and I am glad to have my family here with me today.”

Georgia-Alabama chapter spokesperson Sheila Simpson said that Quilts of Valor chapters are making a special effort to recognize Vietnam veterans. On returning home from the war, some veterans were advised not to wear their uniforms in public. Some civilians opposed to the war were given to harassing U.S. soldiers.

“These soldiers weren’t treated right, and we need to make amends for that if we can,” Simpson said.

“My dad had a long career in the military and talked me into joining the service,” he said. “It provided me a wonderful way of life. It gave me everything I needed. I wouldn’t change anything I did. I truly believe in America and what it stands for.”

Doug Blackmon of Cusseta was in the Army from 1982 to 1986. He was a combat engineer and was stationed in Panama when the Sandinistas were causing trouble in Nicaragua and El Salvador. He said he’s often thanked for having served in the military and has learned a way of responding.

“I always remember what a fellow veteran once told me about how to handle that,” he said. “When someone thanks you for your service, you thank them for being deserving of that service.”

Daniel Burch of Lanett told everyone that he was proud to have served his country. He was in the Army from 1975 to 1995.

“I wouldn’t give anything for my service with the U.S. Marines,” said Ron Davis of Valley. He served from 1990 to 1992 and still bears some scars on his knees for getting injured in a mishap aboard a helicopter.

Gloria Patton Fearn was a part of some history-making when she was in the Army. In 1978, she was with the first group of women who trained alongside men. A 1970 graduate of Lanett High, Fearn joined the Army as a means of supporting her young children as a single mom. She was a popular person among her fellow service members.

“I was in the financial corps, and it was my job to see that everyone got paid,” she explained.

Sewingmachine.com owner and West Point Mayor Steve Tramell thanked everyone in a large gathering for being there.

The Quilts of Valor was founded in 2003 by Catherine Roberts.

The local Quilts of Valor chapter has made a special effort to award quilts to veterans of World War II and Vietnam. Those Americans who came of age during WWII have often been called “the Greatest Generation.” Precious few veterans of that war are still living.