Estimated 1,500 attend concert at The Oaks in LaFayette 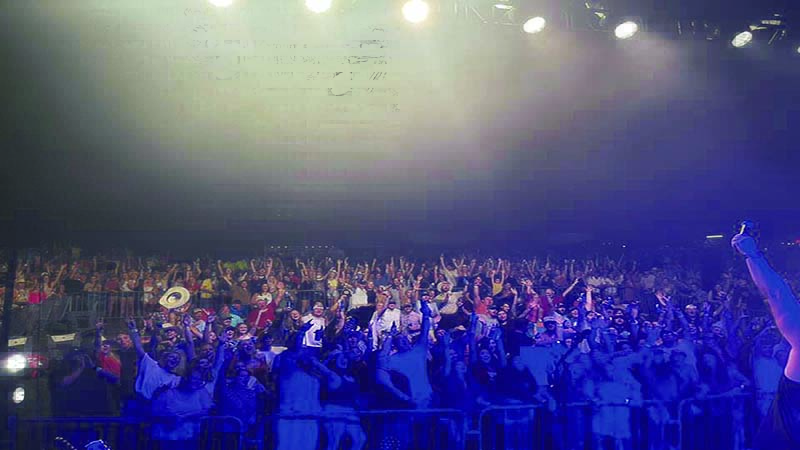 On Friday, The Oaks co-owner Jeremy Weldon and his wife, co-owner Heather “Jersey” Quiros, hosted an outdoor Muscadine Bloodline concert at The Oaks Farm. A part of the proceeds went to the Tri-County Children’s Advocacy Center through the Hope & Heel organization.

Quiros estimated that “a little under” 1,500 people attended the event.

“We had the two food trucks out there, and Nate Smith [a music artist] did a great job, Muscadine [Bloodline] had the crowd going, and Blane [a music artist] with the opener got everybody ready for both Nate and Muscadine.”

Quiros said Hope & Heel raised “a good amount of money” for the Tri-County Children’s Advocacy Center, although she didn’t know how much.

The two food trucks were Rollin’ Rackz Bar-B-Que and SayIt Hotdogs & More. Dry camping was allowed so visitors could spend the night instead of drinking and driving. According to Weldon, the “dry” in dry camping refers to campers not being able to hook up their RVs to electricity, sewage, and water.

Weldon said he and his wife knew Selina Rice, founder and executive director of Hope & Heel, and liked her cause. The event was booked and promoted by Chase Bass, owner of 423 Productions.

On Tuesday, Rice said that her organization won’t know how much money it made from the concert for about a week.

“We’re still finalizing all the money because we’ve got invoices still out and everything,” she said.

According to their website, Hope & Heel aims to have trained facility dogs aid children as they overcome traumatic events.

“Any time there’s a report made to DHR or law enforcement that involves a child, whether it’s physical abuse, sexual abuse, witness to violent crime — any time a child is involved in anything like that, they’re going to call us,” she said. “And they bring the child to us, and we are the ones to talk to the child.”

Muscadine Bloodline is a country music duo that was started in early 2016 by Mobile natives Gary Stanton and Charlie Muncaster, according to their website.