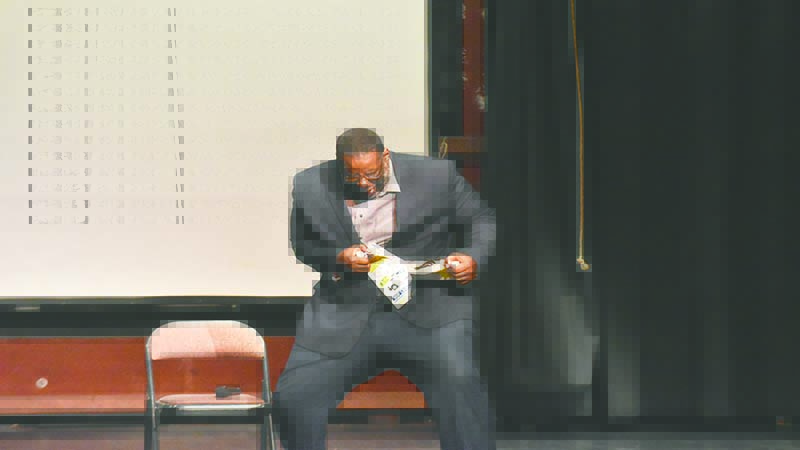 Along with getting a chance to talk through the plans heading into the 2021-22 school year during Tuesday’s institute, teachers and staff in the Chambers County School District had the opportunity to hear from Shawn Harper, a former NFL player who is now a motivational speaker.

Harper talked to the staff about the role each teacher and staff member plays in the lives of each student in the CCSD.

During the 1995 season, Harper was steadily falling down the depth chart for the Indianapolis Colts. During a matchup against the Bengals, Harper, a former fourth-round draft pick out of Indiana, was pulled from the game after getting blown up by a defensive tackle. He knew that he was on his way to getting cut, when Harper realized he is bigger than just a football player.

Situations or circumstances happen in every part of life, whether it is where you live, who your friends or family are or even where you go to school. Harper’s example was in a zoo.

In Harper’s example, a father took his son to the zoo, where they saw an elephant with a small chain around its leg to make sure it didn’t stray too far from where it was supposed to be.

“The reason I love that story so much is because it is my story. I played for several years in professional football and went to college, but I remember standing in the second-grade line on the first day of school… The teacher is talking to the principal, and they’re looking at me. She walks over, grabs my hand and pulls me back into the first-grade line. My friends are looking at me and one of them yells ‘Shawn you failed! Shawn, you’re stupid. Shawn, you can’t hang out with us anymore.’”

Throughout his elementary career, Harper struggled in school. In fifth grade, Harper was pulled out of class and was diagnosed with five learning disabilities. Though he had disabilities, he kept battling through.

Harper graduated from high school with a 1.62 cumulative GPA and a nine on his ACT. He was the No. 154 in his 154-student class. He went to North Iowa Area Community College to play football, where he didn’t even play a snap during his freshman year.

“I’m sitting there on the last game of the season, and I called my mom. I said ‘mom, I quit,’’ Harper said. “My mom began to encourage me, ‘go back for another year. You can do it.’ I began to have a conversation with myself. I said ‘you know what, you’re right. I can’t be successful, but I can win.’ The moment I said that it was like a switch went off in my body, and it began to dig deep into who I am as an individual. It went down to the DNA of who I am. I began to pull and McGiver life. I’m sitting there thinking I am a winner. All actions stem from thoughts. All thoughts are from your belief system and that’s where most people stop at, but there is one level deeper. That deeper level is your self-concept. Who are you, victim or victor? I said I am a winner.

“We’re sold on success. Sometimes success is a man-made construct, and we put it out there. Success is not static, but we are created to win…. Winning is not a bad thing because the ultimate competitor is you. You’re fighting against yourself. It’s the fullest expression of who you are mentally, physically, socially, economically and most importantly is legacy. If life is a game, you play the game to win.”

Harper went from not touching the field as a freshman to spending the entire summer training twice a day at NIACC, becoming a first-team all-region player, earning a scholarship to Indiana and becoming the third pick in the fourth round to the Los Angeles Rams.

Though he had a lot of success after college, Harper didn’t get there by himself. He said his heroes, who helped him reach that success, were his mother and his teachers.

“It was the third-grade teacher, Mrs. Francis. She used to spank me with a ruler and make me sit in the front row, but I knew Mrs. Francis loved me. I could feel it,” Harper said. “She used to say ‘Boy, you get your stuff together, you’re going to do amazing things in this life.’ My support system outside of momma was bleak, but my third-grade teacher believed in me. My fifth-grade teacher, Mrs. Jennings, used to say ‘Boy, you’re not going to be a statistic.’ These were my heroes. In my darkest moments in the dorm room in Mason City, Iowa, with no air conditioning and 98 degrees, it was the seeds of their words that I pulled from.

“You can often count the number of seeds in an orange, but you can never count the number of oranges in the seed. It was in the darkest moments that I pulled from Mrs. Jennings and Mrs. Francis. I still remember these teachers, I don’t remember anyone but this handful of teachers. They are my heroes… The reason your job is so tough because you are in a generational battle. You are changing the trajectory of people’s lives, and that is why everything is coming against you. That is why the enemy is coming against you because if he can get you out of the way, he can have his way with Sally, David or John because he has done a marvelous job eroding and destroying the current support system. You can always tell where the blessing is from where the battle is. This battle is fought in the dark.

“Ninety-five percent of all action takes place in the subconscious, 5 percent is in the conscious. I had the teachers in my life that taught this [the conscious] but attacked this [the subconscious]. They attacked my heart. In my heart, they put belief. In my heart, they put encouragement. They put the seeds that you can do it Shawn. They put it on me. They put the seeds in me, and most of the teachers, they never saw this level in me but they put it in me… Those seeds will generate because they’re [the students] walking into your classroom and most of them are already defeated. When you begin to pour into them and speak life, it doesn’t matter if they accept it or not, because the subconscious is a robot. You are in the programming game. You take control of your culture, you take control of your room and you speak life, because death and life is in the power of the young. The only reason I am here today is because of those huge seeds that I pulled from my heart and I planted in the corn fields of Mason City, Iowa.”