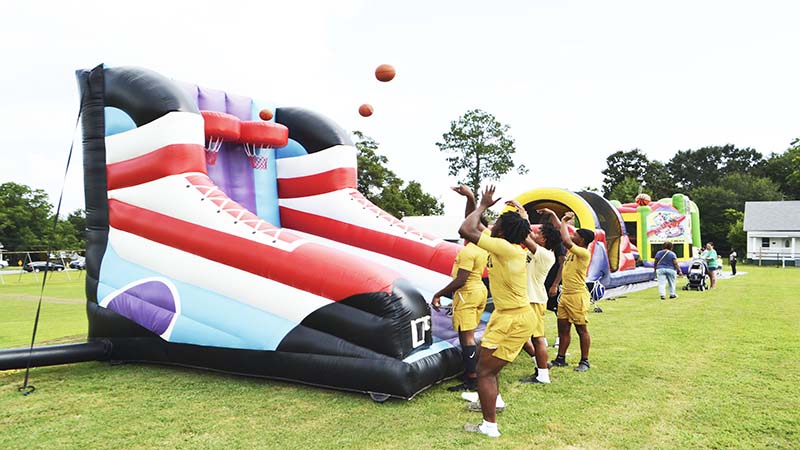 LANETT — Lanett Recreation Director Trent McCants was ecstatic with the turnout at Saturday’s Back to School Bash on the playground across from W.O. Lance Elementary School.

“It couldn’t have gone any better than it did,” he said. “We had some great participation on behalf of all the schools. We thank all the students who were present, their parents and school officials. I loved the way the schools interacted with each other.”

McCants pulled off a successful multi-city event in his second month on the job. He was named recreation director in June. “We are already planning another one for next year,” he said.

Each participating school was rewarded with a $500 donation. Valley High and LaFayette High each received another $100 on having won the best t-shirt design and the hot wings eating contests.

“Co-emcees Gator Kincaid and April Ross helped make it fun,” McCants said. “We want to thank our vendors for helping out on a very busy day. Paul Story helped us a lot with the sound system.”

Stylists from A Perfect Cut were there providing some free hairdos and City Chaplain the Rev. Rodney Jones cooked free hot dogs for the big crowd.

The one disappointment for the day was a summer shower causing the cancellation of a couple of events everyone was looking forward to. Firefighters from the Lanett Fire Department had set up the same kind of obstacle course they use in training. Each school was to have had 12-member teams trying to finish it first. There were several stations set up along the course, where team members could put on firefighter gear with air packs and a big pool of water where they could practice the old bucket brigade routine. They’d fill a big container of water and carry it to a nearby tin roof that was set up and pours that water on the roof as if they were putting out a fire. There would be some pretty heavy lifting involved in this but with a big supportive crowd urging them on it was doable. It just wasn’t safe, though, to be doing it on wet grass.

The same was true for the planned wheelbarrow race. A coach from each team was to push his wife in a wheelbarrow from a starting line to a finish line.

Both events could have been a lot of fun on a dry surface. Perhaps they will try it again next year.

Valley High coed Darcee Wright modeled her school’s winning t-shirt. A panel of judges liked that it had “VALLEY” in big orange letters on the blue front with “Strong Alone; Unstoppable Together” printed on the back in orange letters above a big white Ram head.

The judges also liked the front and back of the Springwood shirt worn by Carson Champion. There was a big red S was on the front of the gray shirt with a Biblical passage from Joshua 1:19 on the back: “Make Your Mark.”

The Lanett and LaFayette shirts were well designed as well. The black Lanett shirt had “CHAMPIONS” spelled out in big gold letters on the front with “Lanett Panthers Rising From the Ashes” in white letters.

The “rising from the ashes” reference is about the effort to rebuild the school’s coaches’ offices and weight room that were lost in a fire this past winter.

The LaFayette shirt was white with some black dog paw prints on the front with big black and gold lettering declaring “the Bulldogs are definitely outside winning.”

Students crowded around the big center stage to cheer on their representative in the hot wings contest. Each entrant had to eat ten wings. The bone had to be fully cleaned of meat and the chewing had to be finished before a winner could be declared. There were some “woof! woof! woofs!’ from the crowd when the Bulldogs were declared the winners.

The two bands present, the Lanett Golden Panther Band and the Pride of the Valley Band, got loud applause from the crowd after playing some of their school’s favorite fight songs.

Despite the event being shortened by rain, a total of 100 book bags were given out. There was a special treat for everyone as they were leaving. A huge rainbow formed over the Chattahoochee River, making for a very colorful sight over the stage.

Saturday’s event revived a tradition that began in downtown West Point a little over 10 years ago. Those back-to-school events drew huge crowds and generated lots of excitement and optimism about the coming school year.