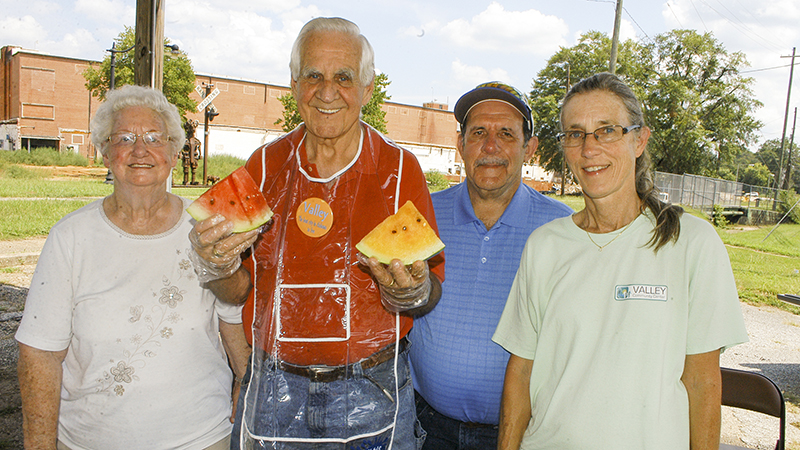 FILE PHOTO: It was Free Slice of Watermelon Day, and the big crowd in attendance had a nice way to cool off on a hot day. Serving the public were, from left, Elizabeth Hall, Ray Edwards, Valley Council Member Jim Clark and Valley Parks and Recreation Director Laurie Blount. --Wayne Clark

VALLEY — The annual Free Slice of Watermelon Day will be taking place at Valley Farmers Market on Friday. It had been originally scheduled for the following Friday but was moved up due to the way this year’s watermelon crop is coming in.

Walter Pulliam of LaFayette and Matthew Steele of Steele Farm in Shorter, will be providing the watermelons. Cold lemonade will also be available.

It’s been a good season thus far at the local farmer’s market. There are anywhere from six to eight east Alabama farmers bringing their produce to the pavilion every week. The fresh fruit and vegetables include everything from peaches to tomatoes, beans, corn and squash to okra, potatoes and pepper.

The market will remain open from 3 to 6 p.m. on Fridays as long as the farmers have produce to sell. There’s usually a fall market just before Thanksgiving when turnip greens, collards and kale are coming in.