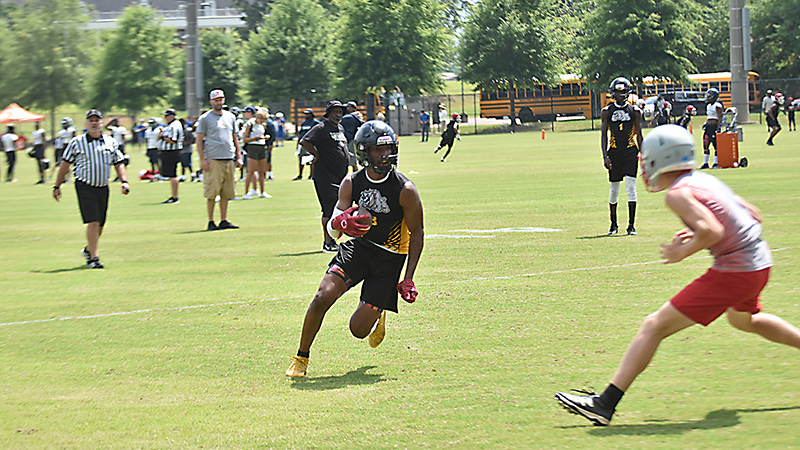 For the past two years, Vinay Singh has just had to rely on his raw athletic ability to get the job done. At 6-foot-2 and around 180 pounds, Singh has been able to fly around the field making plays on defense and has been able to take on smaller cornerbacks on offense.

Now a senior at LaFayette, Singh has worked on slowing his game down so he can focus on the details and become a better route runner, so he can achieve his goal of getting to the next level — playing college football.

Since the Bulldogs season ended to Leroy in the first round of the 2A playoffs, Singh has been working hard on his body and understanding of the game. From his junior to his senior year, Singh has gained about an inch of height, putting him at 6-foot-3. He’s also gained weight, adding about 10 pounds of muscle in the offseason.

Singh, who prides himself on excelling in the classroom, has developed his football IQ, where he has learned more about defenses and how they are guarding him. He knows how to look for space in a zone now and is able to cut a route short or run it deeper so he is in those open pockets of space.

“He’s gotten about an inch taller. The weight room is a lot different. He’s more polished in the weight room,” head coach Juan Williams said. “He used to be ‘I’m alright like this,’ but now he understands why he has to get in the weight room. I think things are easier to him because he’s just doing the things he needs to do to elevate his game. He now expects to get every ball … His IQ is probably one of the best on the team if not the best on the team on both sides [of the ball].”

“Being at middle, I have to let go of some of that physicality because it’s more of a reading area,” Singh said. “It’s more of a leadership role on the defensive side of the ball than where I’ve been playing. At outside linebacker, I’m just bringing it. At middle linebacker, it’s causing me to think more. I’m still physical and still bring it when I shoot the hole, but I’m more of a visual player. I think I’m an overall better player because I know the game.”

Now a senior and a three-year starter, Singh is stepping into a leadership role on both the football field and in school.

“My expectations of being a leader are just paving the way for the young kids, just show them the right things to do and do them effectively,” Singh said. “Basically, I just try to stay on them very hard. I just try to get them to listen and be better students first. I would rather they get better here [pointing to his head] then they’ll be able to listen to me better out here [on the football field]. A lot of people want to be in the shoes that I’m in, but they don’t understand that I have to do the little things.”

Since finishing basketball season, Singh has attended several camps, including a 247Sports camp and a UAB camp. At those camps, Singh has learned how to become a more polished player.

“Be patient and do not rush yourself,” Singh said of the biggest lesson he has learned at camps this summer. “If you just stay focused at the camps and listen to what the coaches are trying to teach you  — because it’s not about going there and just beating everyone. The camps are about getting better so when they see you in the season, they will try to see what they have tried to teach you. As a receiver, I need to see [the field] because there might be a stunt over here but man over there. Different levels of football are going to give me different looks, so I need to just learn the game.”