Valley beats Lanett in another classic matchup between the two rivals 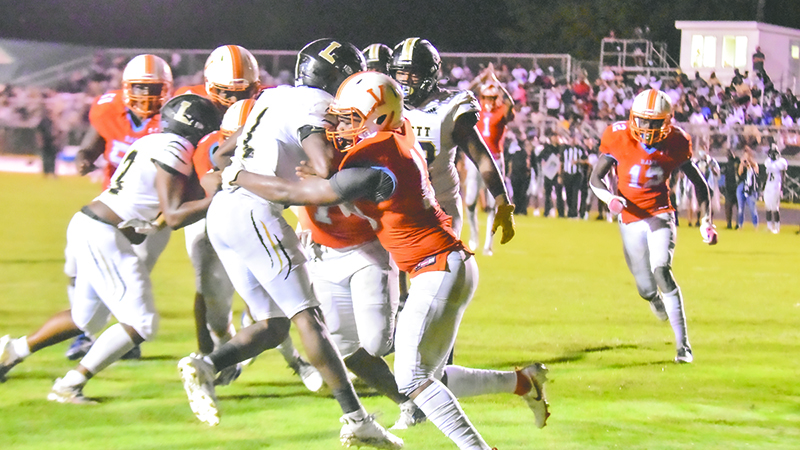 In another game for the ages, the Valley Rams held on for a 14-8 victory over rival Lanett on Friday night at Ram Stadium.

For the second straight year, Valley came out on top of the rivalry, and for the fourth year in a row the game was decided by a single possession.

High snaps, overthrown passes and penalties were the tale of the first quarter.

Lanett lived on the Valley end of the field during the first quarter but somehow managed to walk away with no points. Both teams traded interceptions and Lanett put the ball on the ground a couple of times but managed to retain possession.

In the second quarter, the momentum flipped and so did the field position. Just before the half, a short punt after a three-and-out by Lanett, set up the Rams in scoring position. Shortly after, Valley quarterback Cam Dooley connected with KP Parker across the middle for a 29-yard touchdown strike.

Valley missed the ensuing extra point, putting the Rams ahead 6-0 headed into halftime.

That play was the pivotal point in the game, according to Valley head coach Adam Hunter.

“I think the pass right before the half to KP, Kendall Parker was big,” He said.

In the third quarter, another momentum shift saw Lanett take control after jumping on a Rams’ fumble and the Panthers installing Jarrious Goodman at quarterback.

Goodman handed the ball off to Isaiah Greene from the 13, and Green powered his way in for the score. Lanett was able to convert a critical two-point conversion, taking the lead 8-6.

The Panthers’ defense came up with a huge stop with 10:37 left in the ballgame, holding the Rams out of the endzone from inside the Panther’s 5-yard line.

The Panthers took over from their own 1-yard, and the Rams defense came up clutch, stopping Panthers running back D’Quez Madden in the end zone for a game-tying safety.

With less than 7 minutes to go in regulation and facing a fourth and long, Dooley hit Kalen Sherrell for a 21-yard touchdown that ended up being the game winner.

With just under two minutes left in the game, the Panthers failed to move the ball and burned their final timeout, turning the ball back over to the Rams to finish out the game.

Hunter said after the game that he did not feel as if they played their best game.

“We didn’t play our best ball game. It was sloppy at times,” he said. “We’ve just got to get better. We’ve got to practice better.”

After the game, Lanett coach Earnest Webb said the Panthers had many opportunities to cash in.

Valley (2-0) will travel to Montgomery to play Carver-Montgomery next Friday and Lanett heads to Sylacauga to face B.B. Comer.