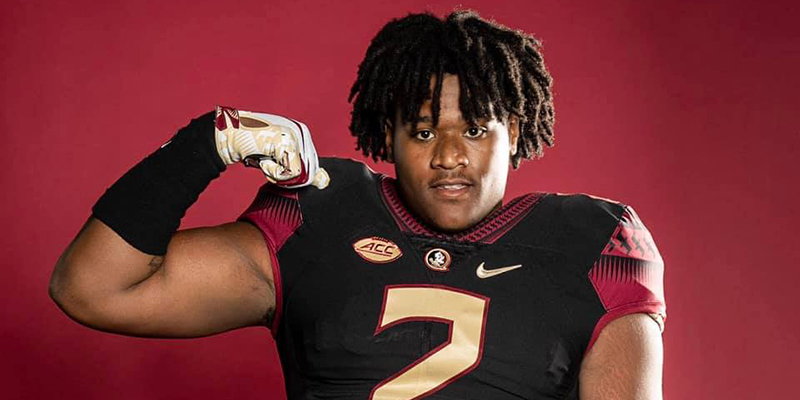 Antavious Woody has become a household name around the country this summer, as the LaFaytte senior has dominated the various camps that he has attended this summer. Entering his senior year, Woody is now a four-star prospect and a Florida State commit, so even more eyes will be on the senior heading into 2021.

Woody has been a standout talent for most of his career, and he has been one of the, if not the biggest player on the offensive or defensive whenever LaFayette stepped foot onto a football field.

He started gaining national recognition in November when Florida State offered him. His recruitment picked up after that, as Woody had more than 15 D-1 colleges offering him to play football on their program.

Woody stuck with the first school that offered him, committing to play football at Florida State on June 28.

“My recruiting went very well,” Woody said. “Florida State, they were my first offer, and I’ve been riding with those guys. I finally made a commitment last month.”

Woody has the potential to play on either side of the ball. Rivals has him as a defensive tackle but would play defensive end in college. 247Sports has him as a tackle. When he attended the 247Sports camp in May, Woody played center, guarding Walter Nolen, who is one of the top two players in the country.

Head coach Juan Williams has been working with him on both sides of the ball. On offense, Woody has been floating between every spot on the offensive line, allowing the senior to learn every position and understand blocking schemes.

“It’s kind of fun to show how versatile I am, so I play anywhere on the line of scrimmage,” Woody said.

On defense, Williams has been working with the senior on getting smaller so the 290-pound senior can fit into smaller gaps between linemen.

“Where I felt like he was short at was on the defensive side, so you see us working him a lot more defensive-wise to get him better,” head coach Juan Williams said. “If he wants to have a chance to play against D-1 talent, I think he has to get better with his arms, his movements are a little stiff. He doesn’t play little enough to me. He has to make himself smaller. He has speed, so that’s something that is God-given. Now he has to understand technique, how to maneuver around the offensive guys if he wants to play on that side of the ball.”

Now entering his senior year, Woody is primed for a breakout season. He finished the 2020 season with 46 total tackles (37 solo) and seven sacks.

“This year is going to be pretty crazy to see what else happens,” Woody said. “School is first, then knock my senior year out. Then, I can worry about Florida State … I just go out there and play to help my team get a win. It takes all 11 to get a win.”

LaFayette opens its season on Friday, Aug. 28 against Central Coosa.