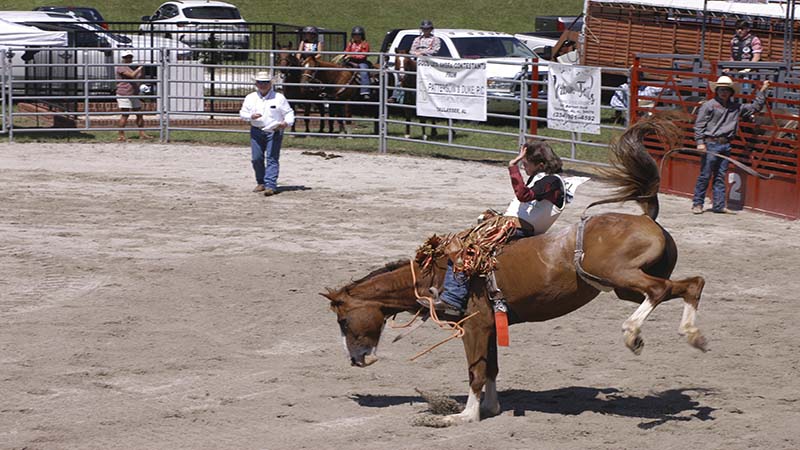 “Allyson has been doing this since she was five years old,” said her mom. “This is her third year in rodeo. She has won saddles, buckles and state titles. She’s in a sport that can help prepare her for a professional career after high school. Rodeo performers learn responsibility, time management and money management.”

He’s in the seventh grade at Chambers this year,” said Ashley. “He plays football, basketball and is on the bass fishing team.”

This coming Friday, Allyson will be participating in pre-game activities in Chambers Academy’s homecoming football game. She will be riding her favorite horse on the field of Torbert-Allen Stadium while carrying the U.S. flag.

“Rodeo is a true American sport,” said long-time Chambers County rodeo promoter Eddie Adams. “We stand for the anthem and kneel when we are praying.”

Winners at the state level earn the right to compete in the national finals. This year’s high school finals will be in Gillette, Wyoming and the junior high finals in Perry, Georgia.

On Saturday, Alabama High School Rodeo Queen Emma Watts of St. Stephens, Alabama, rode her horse while carrying the U.S. flag. She circled the rodeo arena alongside Taylor Vaughan of Spanish Fort, Alabama, who rode her horse while displaying the Alabama state flag. They were followed by a parade of horseback riders carrying the flags of sponsors such as Cinch Jeans, Dodge Ram Trucks and W.W. Livestock Handling Equipment.

Harvey Bradbury, president of the national division of the Alabama Rodeo Association, said he once tried to explain rodeo to someone who didn’t know much about it.

“If you think that, you have never been to a rodeo,” he said. “The people who come here come in expensive motor homes. They are very well equipped and take very good care of their animals. I would not describe them as poor. I think they are doing pretty well.”

Emma Watts is in her third year as the state’s rodeo queen.

“The reason I wanted to run for rodeo queen is that I could do two things I loved: rodeo and meeting new people,” she said. “I like to talk to people about rodeo, encourage them to join our association and to just watch the action.”

High school students from the states of Alabama, Georgia and Florida compete in approximately 10 rodeos each year.