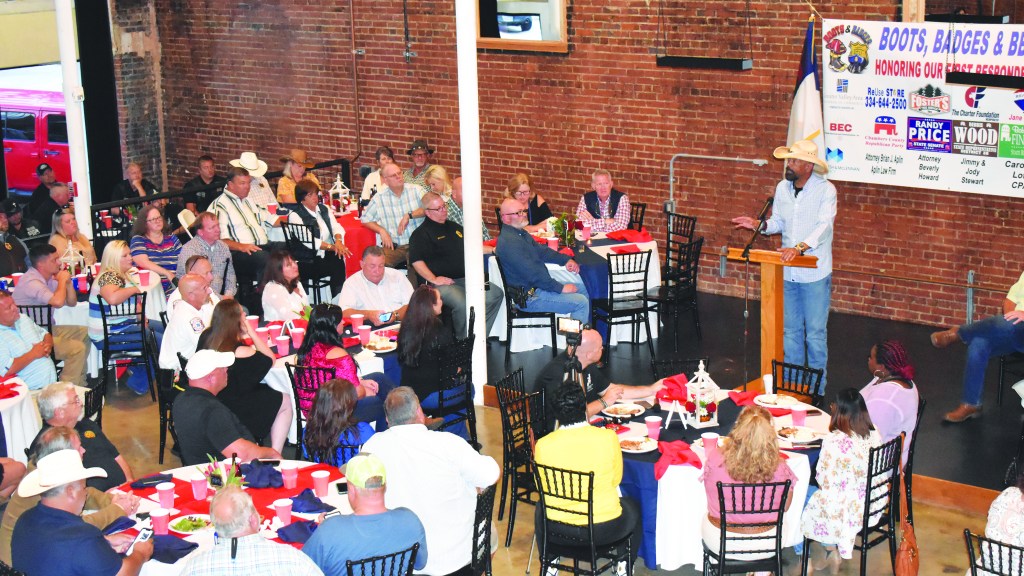 On Thursday, Gator Media hosted its first “Boots, Badges, and Barbecue” event in honor of first responders at Burrow Warehouse in downtown West Point. The event was originally planned to take place at Clark Farm in Lanett, but the venue was changed due to the weather.

Clarke, the former sheriff of Milwaukee County, began his speech with a focus on the importance of tolerating other people’s points of view. He resigned as the Milwaukee County sheriff in 2017.

“I think that in a democracy such as ours, different points of view, disagreement is healthy,” he said. “I really believe that we should all have our point of view. And sometimes, collectively, they’ll form, and you’ll have groups of people that have a point of view. There’s nothing wrong with that. And it doesn’t mean that people who have a different point of view other than mine are wrong.”

He explained the difference between a point of view and a mere opinion.

Clarke said he wasn’t willing to debate people who don’t back up their assertions with facts.

“I don’t know why so many people in this country, mainly on the left, don’t want somebody else that has a different point of view. I really cannot understand that. That’s not the way I was raised. My mom and dad taught me from a very early age, ‘Don’t just follow the crowd. Come to your own opinion about things. And if you truly believe in it, then stand on it.”

Clarke said he aimed to visit all 50 states and that Alabama was his 39th. He said that while he enjoyed cities like Chicago and New York City, he likes meeting “down home real Americans” in less populous areas.

“Americans are wonderful people,” he said. “Does that mean all of them? No, but who cares? The overwhelming majority of people are good people, and they aren’t some of the names that they get called. You’re not racist. You’re not homophobes. You’re not Islamophobes. You’re not xenophobes. How can I say that? Because I’ve met so many Americans, and I know what’s in your hearts.”

Clarke said he doesn’t believe there’s a need for police reform in America.

“Our law enforcement officers are better trained, they’re better educated than at any time in this profession,” he said. “We can still get better. We’re in search of excellence, not perfection. We’ve got to tweak something a little here and there, I’m all for it. I am not for reforming this entire profession no more so than when a doctor makes a medical error that leads to a patient’s death. Nobody calls for reforming the entire medical community. We just don’t do it because it’s not a smart thing to do.”

He stated that cops are under siege, under resourced, underpaid and underappreciated. He said that cops aren’t trained to handle “urban pathologies” such as ineffective parenting, school failure, fatherless homes and questionable lifestyle choices.

“Here’s what we do well: keep the peace, enforce the law, and make arrests for people who break the law,” he said. “We do that well. Sitting down and counseling a child? No, that’s not what we teach people to do.”

While he acknowledged that cops sometimes make bad choices, Clarke argued that people often provoke police to be aggressive by not complying with their instructions.

“Comply with a law enforcement officer’s lawful command, you are going to survive that interaction,” he said. “It’s that simple.”

Toward the end of his speech, Clarke brought up the issue of cop suicide.

“It is happening at alarming rates, record numbers,” he said. “In 2019, 228 police officers committed suicide. … Where’s the cries to call for the public health officials about more money for research on cop suicide? Why do they kill themselves? What’s going on here? There’s an uptick. We need to do something about this.”

Kincaid gave credit to sponsor businesses for making the event a reality.

“There was no money outside the community,” he said. “There was no state money. There was no federal money. The reason this event happened is because, in my opinion, we have got the best small business group anywhere.”

Kincaid said it was a “little bittersweet” that three of his heroes — Lockhart, Smith and Tommy Weldon — were soon going to be retired. He said they were a part of the reason he decided to hold the event.

Smith wasn’t in attendance, but some of his colleagues were.

Kincaid said on Friday that he didn’t yet know the total amount of money raised but said it will be split 50/50 between the Alabama Sheriff’s Girls Ranch and the Valley Rams Booster Club. He said he expected the event to generate $5,000 to $7,000 after expenses.