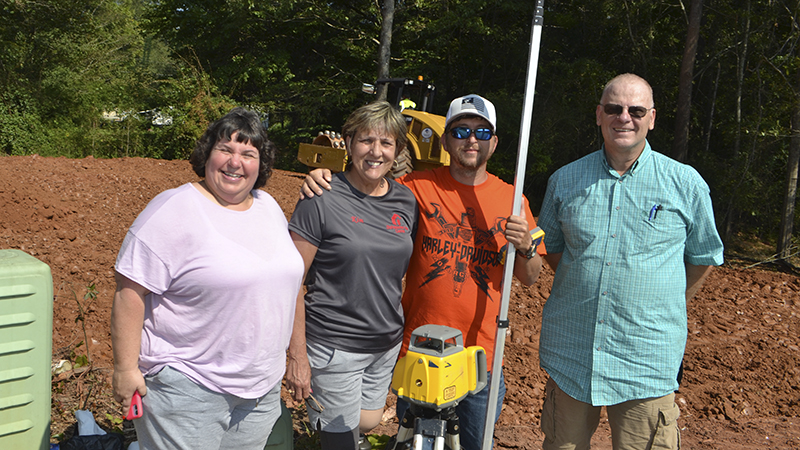 WEST POINT — The Chattahoochee Fuller Center Project (CFCP) is getting a big helping hand this week from Kia Georgia and Takco Construction of LaGrange.

KMMG is providing more than 30 truckloads of dirt, and Takco is having it taken to a site on Higgins Street, where it is being spread over adjoining lots and compacted by a sheepsfoot roller.

The dirt is being removed from the Kia pad where a new parking lot is being built.

“We want to thank Kia and Takco for helping us with this,” said Mayor Steve Tramell.

“They have the men and equipment to handle such projects and get it done super fast. It would have taken us much longer if we had gotten small contractors to do it.”

Takco had four large dump trucks running constantly, hauling in big loads of dirt from what once was the Grady Webb Farm.

The dirt will allow the sites of CFCP Homes No. 65 and 66 to be several feet above the curb. Each lot will be 26 feet wide and 44 feet deep. The homes will be built the week of October 3-10. A group of 17 people from the Bunkertown Brethren Church of McAlisterville, Pennsylvania will be heading up the project. Lots of local volunteers will be assisting.

“I am so excited about how it’s coming together,” said CFCP Executive Director Kim Roberts. “This past week we went to Tupelo, Mississippi, where Eight Days of Hope donated the shingles, flooring, tubs and light fixtures for the two new homes. We thank them so much for helping us. We also thank Phil Teague for providing us a flatbed truck and driver to transport it back home.”

The upcoming project has gotten some other generous donations.

“The Church of the Highlands in Birmingham has donated the Hardie board for both homes,” Roberts said.

“Knauf has donated the insulation and West Frazier (formerly Norbord) the OSB.”

The 44 sets of walls for each home are ready to go in. The first sets were built over the summer by youth and adult leaders from the First Baptist Church of Minden, Louisiana, who spent a week in West Point and Lanett earlier this summer. The second sets were built by members of the Bunkertown Church.

“They purchased all the materials needed for the walls and put them together,” Roberts said. “They will have them transported to the site on a flatbed truck.”

Bethlehem Baptist will be the host church. An opening ceremony will be taking place there on Sunday evening, Oct. 3. Starting that night, they will be serving dinner to all the volunteers throughout the week. Some of the volunteers from Pennsylvania will be staying at the Hampton Inn & Suites in Lanett and others at the Plant City Methodist Church.

Two local families have been selected to live in the two new homes at the end of Higgins Street. Luteshia Finley and her two children will be living in Home No. 65 and Rita Rowland and her 12-year-old granddaughter, Kennedy, will be living in CFCP No. 66.

Rowland is a 14-year veteran of the U.S. Army. No. 66 will be the first home she has ever owned. She has two grown children, son Jaylin and daughter Asia.

Tramell said that someone in upper level management at KMMG contacted him and asked if he knew of anyone who needed some dirt that was being removed from the Kia pad to make room for more parking space.

“We appreciate them doing that,” Tramell said. “We also appreciated Takco for what they did in getting the dirt to the site and compacting it.”

With its main office located on Airport Parkway in LaGrange, Takco is part of the residential building industry. It annually generates more than $2 million dollars in sales and is involved in all kinds of construction including office buildings and single-family homes.