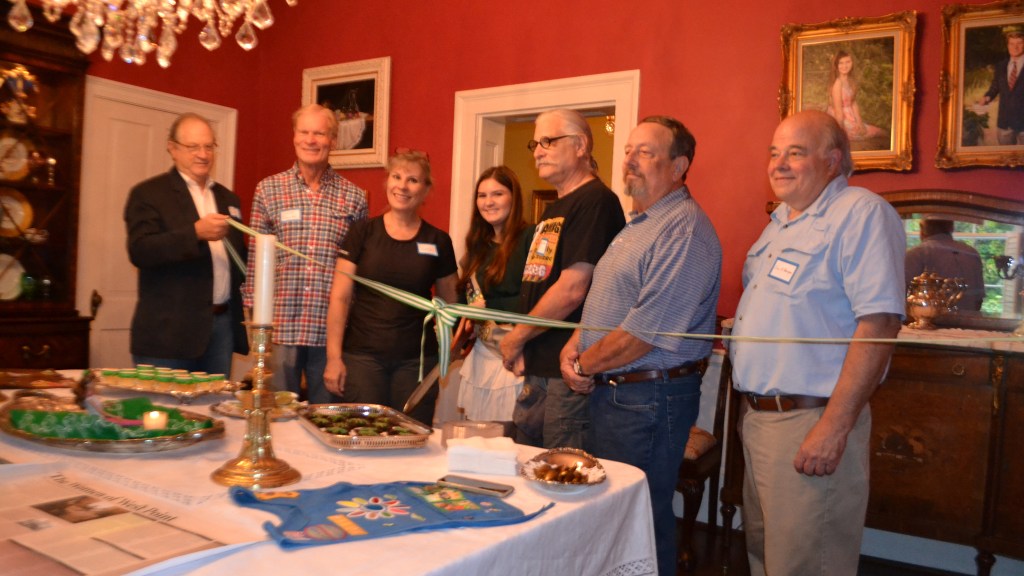 THANKS FOR YOUR HELP — Catherine Slavich (at center) held a ribbon cutting at her family home on Wednesday to thank members of a local committee who helped her with her Girl Scout Gold Award project. She replaced three trail markers along the switchback trail leading to the fort. The markers had been there for more than 20 years and had become very hard to read following years of exposure to weather and the sun. For her Silver Award project several years ago, Catherine replaced one of the markers just inside the fort. In appreciation for the job she did, she has been named a youth leader for the American Battlefield Trust, which will see that a fifth marker will be replaced. Shown above, from left, are committee members Rea Clark, Larry Duncan and Katie Roberts, Catherine and committee members Billy Clark, David Hollis and Joe Thompson.

LANETT — In competing for her Girl Scout Gold Award, Catherine Slavich took on the task of replacing three pathway markers at restored Fort Tyler, which is located behind the Slavich home on North 18th Street. She’d previously earned her Silver Award by having another marker inside the fort replaced.

Approximately 20 years ago, the pathway markers were placed alongside the switchback trail leading to the top of the hill where the historic fort is located and inside the fort itself. Over time, they have become almost illegible due to sun exposure and being out in all kinds of weather. The ones that have been replaced in the Gold Award project are entitled “The Women of West Point,” “General R.C. Tyler and Colonel Oscar LaGrange” and “Recovering the Past. Artifacts Found at Fort Tyler.”

On Wednesday evening, the Slavich family hosted a reception in the historic Griggs-Slavich House to recognized members of a local committee who helped her with the project. They include principal advisor Rea Clark, Billy Clark, Joe and Debbie Thompson, David Hollis, Larry Duncan and graphic designer Katie Roberts.

“I couldn’t have done this without them and without my Girl Scout mentor, Susan Gallagher, as well as Alayne Gurak. If I needed questions answered, they would always help me. I’d also like to thank my Girl Scout troop leaders, Mrs. Jennifer Shaw and Mrs. Elaine Laughbaum, with whom I started my journey in K4,” Catherine said.

Catherine is a junior at Brookstone School in Columbus. She’s a member of Girl Scout Troop No. 50346 and the Historic Georgia Troop. She is considering attending Auburn University or the University of Alabama following her high school graduation. Her brother, Aleks, is currently attending Alabama.

The cost of replacing the markers was covered by donations made by individuals, the Fort Tyler Association and the Chattahoochee Valley Historical Society.

In appreciation of her work on this project, Catherine was recently selected as a youth leader for the American Battlefield Trust, which will be donating funds for the replacement of more of the markers.

“There are ten of them at the fort,” Catherine said. “Hopefully by next year, at least five of them will be replaced.”

Catherine and her family had hoped to hold a ceremony inside the fort but decided to hold it indoors at the Griggs House due to Wednesday’s rain.

“Thank you for coming to our home for the ribbon cutting,” Catherine told the group. “Photocopies of the signs I replaced are on the table. Please take a moment to look at them.”

The “Women of West Point” marker tells of how women like Ann Bull, Flora Baker, Charlotte Croft, Emily Flemming and Lois Griggs endured our country’s costliest war only to have it come in full force to their doorsteps a full week after Lee surrendered at Appomattox and one day after Abraham Lincoln had died.

With communication being very slow over a war-devastated region, they knew nothing of this at the time.

“The General R.C. Tyler and Colonel Oscar LaGrange” marker tells of General Tyler thanking a group of West Point women for making a hand sewn Confederate flag for the fort. He made good on a promise he made them that he would die before surrendering it to the enemy. Tyler is thought to be the final general to be killed in hostile action in the U.S. Civil War. According to some accounts of the Battle of West Point, he was killed by a Union sniper in the opening moments of the battle. The Confederates holding the fort were greatly outnumbered by the Union forces, which included artillery and dismounted calvary armed with Spencer repeating rifles. The defenders held on for some time before running out of ammunition and surrendering. This allowed Union soldiers to burn the bridges crossing the Chattahoochee and to destroy the railroad stock in the West Point rail yard.

The “Recovering the Past” marker tells of artifacts that have been found over the years in or near the Fort Tyler battle site.

This includes bullets, shrapnel, unexploded cannon balls, parts of swords, uniform buttons, and many other items a soldier of the period would have had.