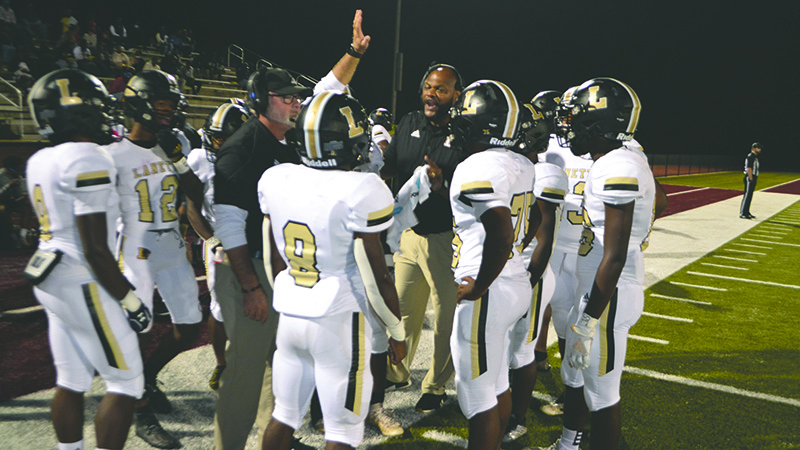 ROANOKE — A lucky bounce on an improbable extra point try was the difference in Handley’s 19-18 win over Lanett Friday night at Wright Field. With 5:29 to go in the game, Handley tied the game on a short run by their star back Tae Meadows.

The team was flagged for excessive celebration on the play.

The penalty moved the ball back to the 19-yard line. Too far for a two-point try and not much chance of success on a kick, especially given the kicker’s badly missed point-after on Handley’s first touchdown.

Sometimes the football gods pick unlikely heroes to make game-winning plays. This time the kicker made the equivalent of a 36-yard field goal thanks to the kick skipping off the upright and going through.

The Panthers had appeared to be on their way to a win through most of the second half. After a 6-6 tie at intermission, they went ahead 12-6 on an 84-yard run by D’Quez Madden on the first play from scrimmage in the second half.

The play looked very similar to Handley’s first score. Madden, like Meadows on his 81-yard run, found a gaping hole off right guard and used terrific speed to reach the secondary and outrun the defenders.

Lanett scored three touchdowns in the game but missed all of their two-point conversions. Had they made just one of them, they probably would have won the game.

Handley missed their first two conversion attempts, and the third one looked to be the one least likely to succeed, but it did and they are now 4-0 on the season. Lanett fell to 4-2, both losses coming to larger schools by classification.

With Handley having their first lead since early in the first quarter, Lanett had one more chance to pull it out, but they couldn’t move the ball on their last possession. Handley took over near midfield and ran out the clock.

The Tigers led 6-0 with 7:05 left in the first quarter on Meadows’ 81-yard run. The hero-to-be badly shanked the PAT try and didn’t get another chance until Handley coaches thought the 19 was too far out for a two-point try.

Lanett tied the game at six on a 16-yard run by Madden with 3:27 left in the quarter.

Both teams had chances to score before halftime but couldn’t take it in.

Lanett sorely misses not having a reliable field goal kicker. Just before halftime, they had it fourth and goal on the five. A good kicker might have been the difference maker right there.

They went for it and didn’t make it, leaving the score knotted at six at halftime.

Earlier in the second quarter, Handley went for it on fourth-and-goal near the five. They threw an incomplete pass to the corner of the end zone to end the drive.

Two dazzling runs by Madden put the Panthers in the lead on two occasions in the second half, first at 12-6 and again at 18-12. The second run was roughly 64 yards.

What proved to be Handley’s game-winning drive was set up by a Lanett turnover near midfield. The Tigers steadily drove it down the field and got the score on a short run by Meadows to the pylon on the north end of the field.

The Lanett-Handley game was touted as a contest between two teams with feature backs. It turned out that way. Meadows had all three TDs for the winning Tigers, and Madden all three scores for the Panthers.

The defeat was hard to take for Lanett. Before the late turnover, they looked to be on their way to their third straight win over Handley at Wright Field. Wins there in 2017 and 2019 were part of state championship runs. Handley’s 6-3 overtime win at Lanett last year was the closest they came to losing last year.

Lanett can now put two frustrating losses to much bigger schools behind them and focus on a strong October run to the 2A playoffs. On Friday, Oct. 1, they will take on Vincent, on Oct. 8 at Ranburne, Oct. 15 at home versus Randolph County and Oct. 22 at Horseshoe Bend.

Chambers falls to Pike Liberal Arts in battle of…