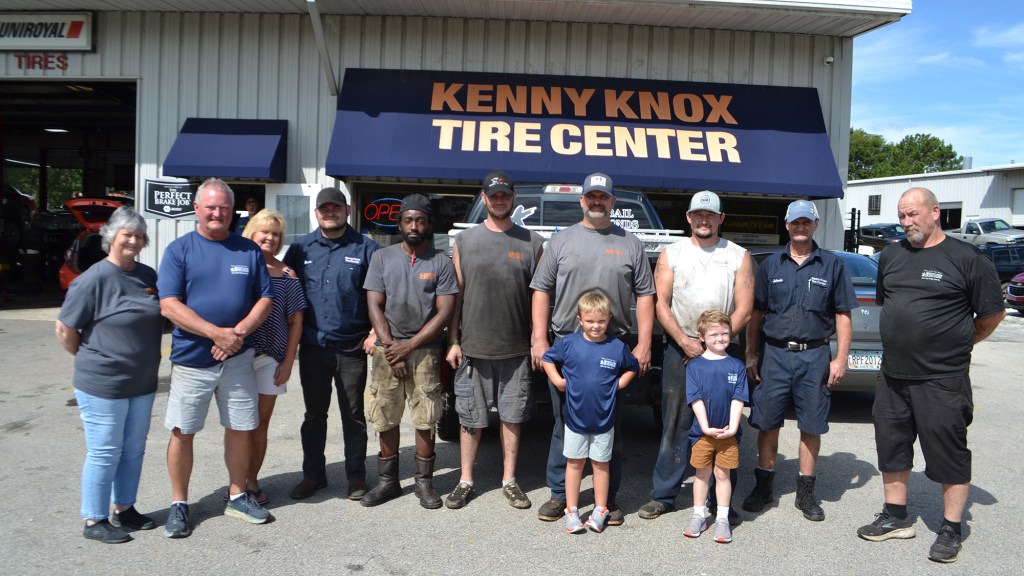 25 YEARS ON FOB JAMES DRIVE — Kenny Knox Tire Center is celebrating its 25th anniversary this week. The business opened on Fob James Drive in Valley on Sept. 21, 1996. On Tuesday’s 25th anniversary, they hosted a fish fry to thank the community for having been good to them over the years. Above, Kenny and Kathy Knox are with some of their employees. From left, are Kathy Arnett, Kenny and Kathy Knox, Kane Mezick, Romello Tolbert, Stacy Whittington, Brandon Heath with six-year-old son Kellan Heath, Chris Pendley with five-year-old son Rush Pendley, Johnnie Patterson and Norman Paul.

VALLEY — Kenny Knox Tire Center is celebrating its 25th anniversary this week. Since Sept. 21, 1996, it’s been open on Fob James Drive as a family-owned business providing honest and professional auto repair and maintenance to Chambers County.

Of course, its convenient location just off Exit 77 on I-85 makes it an ideal for anyone in Lee, Troup or Harris County in need of tires. The business also has steady customers from Roanoke and the Columbus-Phenix City area. Kenny Knox Tire is part of the NAPA AutoCare Center network and honors the nationwide Peace of Mind Warranty on all qualifying services.

The business is widely known for its quality brands and fair prices. The customer can choose from brands such as Michelin and Nexen.

“Except for 10 years when I was selling insurance, I have been around it all my life,” he said.

Kenny’s dad, Junior Knox, was well-known in the West Point-Lanett area for courtesy, being fair with customers and offering them quality tires at fair prices. Kenny worked for his dad in his teen years, and when he decided to take a career turn after leaving the insurance business it didn’t take him long to get back into tires.

“It took me about a half hour to make that decision,” he said.

Kenny was a star athlete at Lanett High in the mid 1970s and has carried on a keen interest in sports over the years. He’s an Auburn fan but has lots of friends who follow Alabama, Georgia and the other big-time programs. A long-time signature of the business is the jingle loosely based on a rock classic that goes “Kenny Knox Tire off of I-85 (and the phone number) 756-8473…”

On Tuesday of this week, Kenny Knox Tire hosted a fish fry to thank the local community for its support of the business in its 25-year run on Fob James Drive.

Two current employees, Joe Reeves and Lavon Stephenson, have been with Kenny since the start.