LaFayette makes a statement with 34-12 win over Randolph County 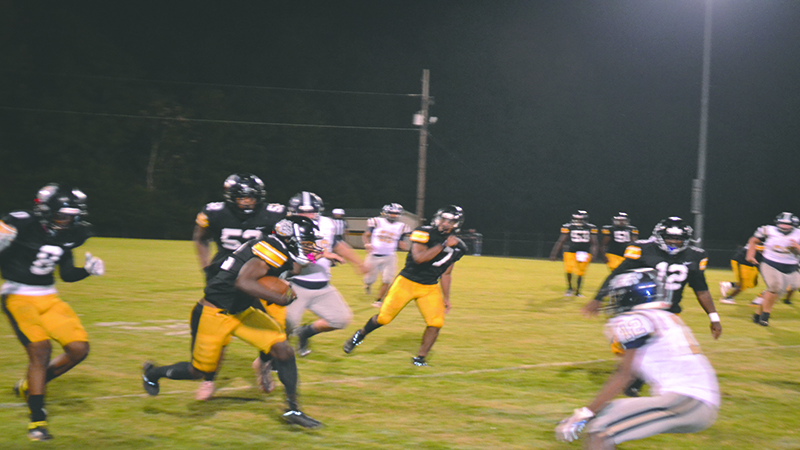 LaFAYETTE — LaFayette High’s dynamic duo running back tandem of B.J. Baker and Joshua Combs combined for 233 yards and four touchdowns, all in the first half, to lead the Bulldogs to an impressive 34-12 win over the Randolph County Tigers. This time last year, Randolph County was the No. 1 2A team in the state.

The combo of five-foot-two quarterback Tazarius Towels and six-foot-three wide receiver Vinay Singh teamed up on a 73-yard TD strike to help build that first half lead.

LaFayette had such a big lead so fast the starters didn’t get much playing time. Baker carried only five times for 82 yards and had scoring runs of two and 63 yards. Combs’ numbers were eye popping. He carried just three times for 151 yards. He had scoring plays of 66 and 85 yards.

On their big scoring plays, LaFayette burned Randolph County on the corners. They quickly got to the outside with the football ,and it was off to the races down the sideline.

Combs’ 85-yard run was a thing of beauty. LaFayette led 21-0 at the time and had just stopped Randolph County’s first serious scoring bid on their 15.

On the first play of the next Bulldog possession, Combs took a pitch from quarterback Towles around the right side and like a flash was out to the sideline and running in the open.

As the Tiger pursuit was closing in on him, he made a great move around the Randolph County 30 and headed untouched to the goal post on the west end of the field.

That made it 27-0 with 29 seconds still to play in the first quarter.

Baker had his most amazing run of the night early in the second quarter. Though it was negated on a holding call, it was a treat to watch. On the play, Baker took a handoff off the left side of the line and had a nice gain to the sideline before it looked like a Randolph County player would knock him out of bounds near the sideline.

The defender came in low for the tackle, but Baker anticipated it and leaped over him, kept his balance and ran some 40 yards to the end zone, completing what would have been a 53-yard TD run without the penalty.

The Tigers had a 61-yard drive late in the half to put some points on the board.

A touchdown pass in the left corner of the west end zone made it 34-6 with 1:32 left in the half.

The visitors managed one more score on a fourth quarter TD pass to make the final 34-12.

Play got a bit ragged for LaFayette in the second half. With a big lead in hand, the Bulldogs appeared content to run the clock and not make any major mistakes.

The LaFayette defense was led by six-foot-five, 260-pound defensive tackle Antavious Woody, who had 10 tackles, including two for losses. Linebacker David McCoy had nine tackles and Vinay Singh eight tackles and one sack.

The Bulldogs will have their third straight home game next Friday versus B.B. Comer.

They will take to the road for the first time this year on Sept. 17 when they are at cross-county rival Lanett.