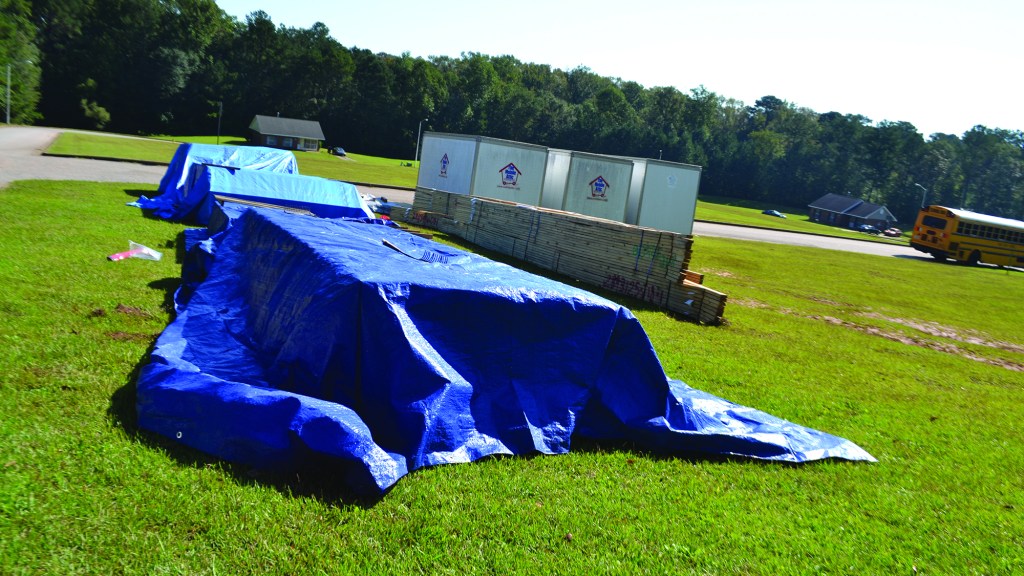 The concrete pads have been poured, and the building materials are on site for a Chattahoochee Fuller Center Project (CFCP) build. At 6 p.m. on Sunday evening, Bethlehem Baptist Church in West Point will host a kickoff event, and early the next morning the walls will be going up for CFCP Homes No. 65 and 66. The two new homes will be built side by side on Higgins Street. The families will be moving in the new homes around the first of November, time enough for them to have special holiday celebrations on Thanksgiving, Christmas and New Year’s.

WEST POINT — Two concrete pads have been poured, the house trusses, walls and additional lumber are on site and the mobile minis are in place for the house captains. Good weather is in the forecast for next week, and all is ready, set, go to build two new Fuller Center homes on Higgins Street next week.

Dorian Lopez poured the pads last week. After the houses are built, the City of West Point will be connecting the two new homes to water and sewer and after that, Lopez will come back to put in concrete driveways for the new homes.

“We are ready to go and can’t wait to get started,” Chattahoochee Fuller Center Project (CFCP) Executive Director Kim Roberts said. “We are expecting approximately 125 people at our 6 p.m. kickoff event at Bethlehem Baptist Church on Sunday evening. We appreciate them being the host church for our build.”

Speaking at the event will be the church minister, Dr. W.T. Edmondson, along with Linda Fuller Degelmann and David Snell from the Fuller Center for Housing in Americas, Georgia.

“It’s going to be a big reunion,” Roberts said. “We will have Barry and Linda Spofford coming back to the kickoff event. We’ll also have Seth Kujat. They were so helpful to us in some of our past builds. We are looking forward to seeing them again.”

Seth’s brother, Bryce Kujat, will be a co-captain for CFCP House No. 65. The house captain will be A.J. Jewell. He has been to CFCP builds many times in the past. Doug Stephens will be another co-captain on House No. 65.

A total of 17 members of the Bunkertown Brethren Church in McAlisterville, Pennsylvania will be in town next week to head up the work on CFCP No. 66. Barry Stuck will be the house captain and Mike Dressler the co-captain.

The walls will be going up on the pads early Monday morning. It should take a day-and-a-half or two days to have the houses dried in. The lion’s share of the work will be done by the end of the week.

Bicyclists from the Fuller Center will be in town the following week to finish the remaining items on the punch list.

“We should be able to move in the two families around the first of November,” Roberts said. “They should have a very memorable Thanksgiving and Christmas season this year. We are happy for them.”