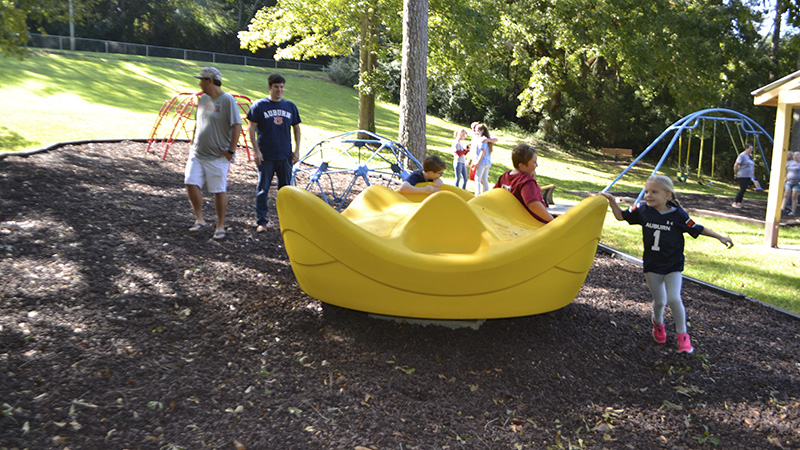 VALLEY — The playground at Valley City Park was filled with happy children Saturday morning. They were testing out new equipment such as a green tree climber, a red Vortex climber, a yellow Bolta spinner and a two-person fire truck rocker.

Phase I is now completed, and Phase II is on the way.

In addition to the new equipment, some playground items that had been in City Park were refurbished. It has the appearance of brand-new fun rides. This includes a four-seat swing set and a blue climber.

This is a really nice place to go with families with young children, and it didn’t happen overnight.

“We started working on this two-and-half years ago,” said Kristen Nelson, secretary of the Junior Variety Club. “It has been a continuous process since then.”

“We want the community to come out and enjoy this,” said Amy Nolen, president of the Junior League of the Chattahoochee Valley.

The Junior League has a 501(c)3 nonprofit status. They were able to seek grants for the project. They received a $10,000 grant from the Charter Foundation.

Some CARES Act funding helped purchase the yellow Bolta spinner, which is something parents can ride on.

The playground is located under some cool shade trees. There is a picnic pavilion with a table on a concrete pad and several more nearby picnic tables on pads along with some benches on concrete pads.

McDonald’s of Valley made an important contribution to the playground. When they got a new indoor playland, they gave the old one to the city to be used at City Park. It was one of the more popular attractions at Saturday’s opening. Kids love climbing up through it.

Very soft and kid friendly, the rubberized mulch is some four inches thick. It was placed there by Reid Riley, Toby Sides and Chuck Rudd of the city. These soft spaces are enclosed by borders.

Phase II will have something for all ages. It will be known as a Ninja Warrior Obstacle Course. It will be going up on the hillside leading up from the playground.

“We hope to have it in place in several months,” Nelson said. “We’d like have a grand opening when it’s in place.”

Something else Nelson and Nolen would like to see are signs off Fob James Drive leading to the playground. They’d also like to have some signs in the park acknowledging the contributions made by organizations like the Charter Foundation.