Official opening of Valley City Park to be held Saturday 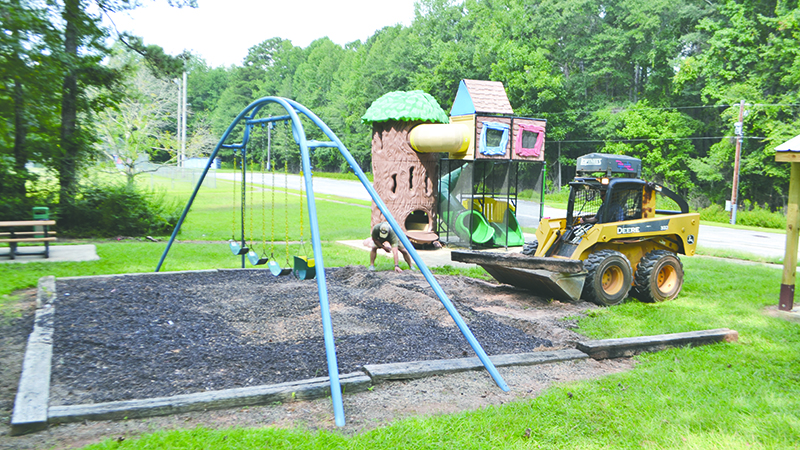 At 11 a.m. EDT on Saturday, Sept. 18 an official opening will be taking place at the new playground at Valley City Park. It’s been a cooperative effort on the part of the city, the Fairfax Junior Variety Club and the Junior League of the Chattahoochee Valley. The Junior Variety Club and the Junior League raised a total of $10,500 for the project. The city put in an additional $1,000 and Valley Parks & Recreation completed the installation work.

The largest piece in City Park was donated by McDonald’s of Valley. It was moved out and given to the city when they got a new indoor playground.

Some of the older pieces in the playground have been refurbished, and four new pieces have been added. They were purchased from Burke Playground Equipment and include a two-seat fire truck rocker, a Verve climber, a tree climber and a yellow spinner.

Older equipment that’s been reworked to be like new includes a swing set with four swings and some monkey bars.

The playground equipment has been placed on surfaces that have been extensively reworked by Reid Riley and Toby Sides. Mulch that’s roughly eight inches thick is enclosed by plastic borders that are eight inches high. The new borders are replacing cross ties that had gotten in bad shape over the years. There’s a new pavilion with a picnic table on a concrete pad.

“We are hoping people use them,” Sides said. “We have worked hard to have a nice place here, and we don’t want people messing it up by littering it. The trash cans are there for a reason. Use them. This place will be such an asset to the community if people keep it clean.”

At Monday’s council meeting, Mayor Leonard Riley invited everyone to come out to Saturday’s opening and to see the new playground.

“It’s really nice,” he said. “It’s a very colorful place now. All the equipment looks new. I’m really fond of the swing set area with the mulch. I am pleased with the overall appearance of City Park and the playground. I would like for people to come out and see it on Saturday.”