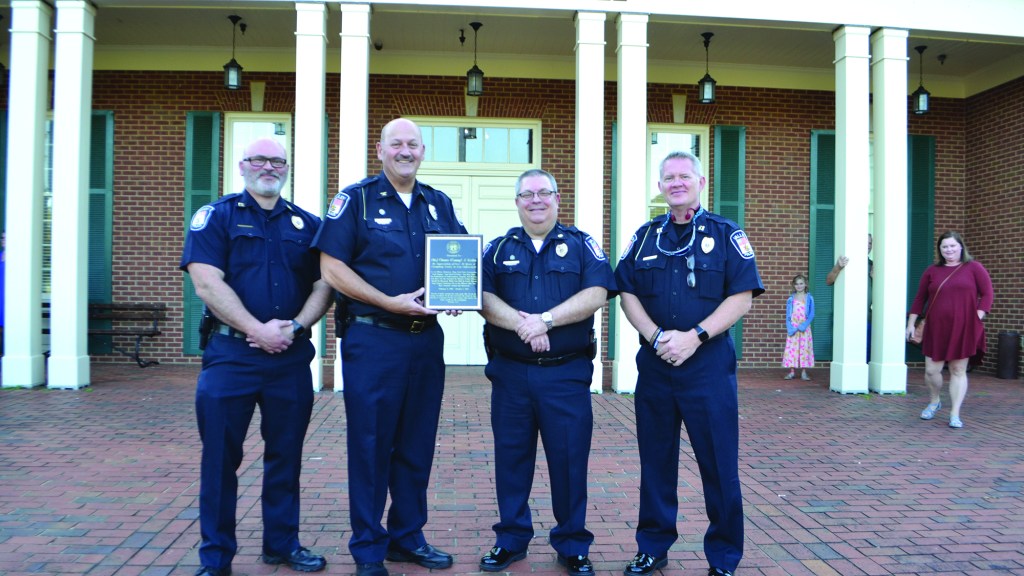 Outgoing chief honored: On Monday, the Valley City Council honored outgoing Police Chief Tommy Weldon (second from left) with a plaque presentation. It was presented to him at the meeting by the incoming chief Mike Reynolds (third from left). Two long-time officers with VPD, Chris Daniel (far left) and Stacy Shirey (far right) were each promoted to the rank of captain. Their wives pinned on their captain bars. The wives of Weldon and Reynolds pinned on new badges for them, the chief’s badge for Reynolds and an honorary retired chief’s badge for Weldon. All were honored at a reception in the city hall conference room following Monday night’s council meeting.

VALLEY — Monday was the final Valley City Council meeting to be attended by Police Chief Tommy Weldon before his retirement on Sept. 30. He has had a 36-year career in local law enforcement, most of it with the City of Valley. A large crowd of family members and well-wishers on hand to thank him for the work he’s done for the community over the years and to wish him a long and healthy retirement.

Before talking about his coming retirement, Chief Weldon promoted two long-time VPD officers, Chris Daniel and Stacy Shirey, to the ranks of captain. They will be top assistants to new Chief Mike Reynolds, who will officially be sworn in on Monday, Oct. 4. The wife of each new captain pinned on their captain bars.

“I am excited about the future of Valley Police Department,” Weldon said. “The department will have some very good leadership with the new chief, Mike Reynolds, and the two new captains, Chris Daniel and Stacy Shirey.”

There was a transfer of the chief’s badge with Weldon, in a surprise move, receiving a retired chief’s badge.

Weldon said that something he was especially proud of was that he had served in the Valley Police Department under all its mayors.

The city’s first mayor, Hugh Hood, was in office when he first joined the department. There were times when he left the city to serve on the Chambers County Drug Task Force and as chief deputy with the Chambers County Sheriff’s Office, but he managed to serve the city as an officer or detective during the terms of Bobby Crowder and Arnold Leak and as chief under Leak and the current mayor, Leonard Riley.

“I have really enjoyed this job,” Weldon said. “I want to thank the city on having looked within the department on having its police chiefs.”

On behalf of the city, Reynolds presented Weldon a plaque thanking him for his service.

“You have been the embodiment of professionalism, empathy and wisdom,” it reads. “You have set the standard by which a police officer should be measured. While you will be sorely missed, your legacy continues on in the officers you have trained, guided and mentored.”

The plaque also lists a Bible verse from Romans 13:4 – “For he is God’s servant for your good. But if you do wrong, be afraid. for he does not bear the sword in vain. For he is a servant of God, an avenger who carries out God’s wrath on the wrongdoer.”

Each member of the council took turns thanking Chief Weldon for his service and congratulating the two new captains, Daniel and Shirey.

“I have enjoyed working with you over the past nine years,” Riley said. “It’s unusual to have had this with no controversy. Sometimes a police chief can be a lightning rod. Thankfully, we had no such trouble in your time as chief.”

Following the meeting, Weldon, Reynolds, Daniel, Shirey and their families were honored in a reception in the conference room at city hall. The council will meet at 6 p.m. EDT on Monday, Oct. 4 to swear in new chief Mike Reynolds.