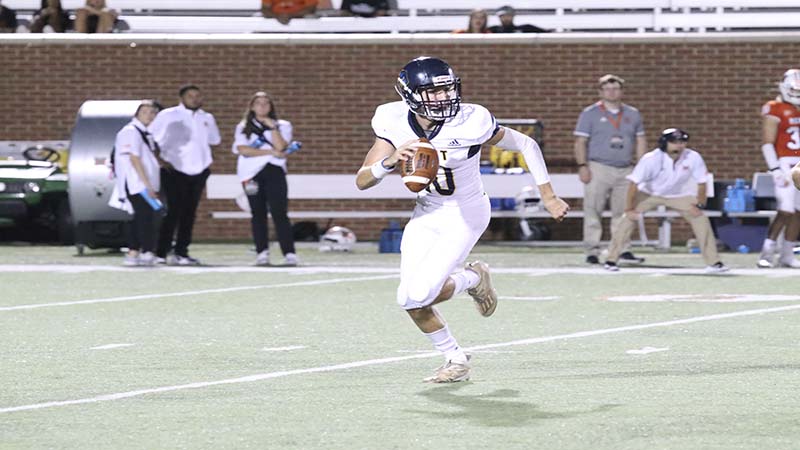 Peyton Allen scans the field in his first collegiate game against Mercer Thursday.

The Point University football team opened its 2021 season Thursday evening, traveling to Macon, Georgia, to face NCAA Division I opponent Mercer, and fell to the Bears 69-0.

The Skyhawks went three and out in their first possession of the night but prevented the Bears from scoring in their opening possession after a Justin Jackson interception. The Skyhawks were unable to keep the momentum of Jackson’s interception going, as they went three-and-out once again, and the Bears answered by scoring their first touchdown of the night with 9:40 left in the quarter.

Less than a minute later, the Bears intercepted a pass from Peyton Allen and scored a minute later to take a 14-0 lead at the end of the first quarter.

Mercer connected for a touchdown with every possession in the second quarter and entered halftime, leading 42-0.

Mercer held the possession at the start of the second half and found their way into the red zone, but a fumble, recovered by the Skyhawks J’Quan Warren, turned the possession back to Point.

The Skyhawks were only able to gain seven yards and once again went three and out. Mercer went on to score two more touchdowns to enter the final quarter ahead 56-0.

The Bears scored two more touchdowns in the fourth quarter but only connected for one PAT.

The Bears accumulated 539 total rushing yards and 239 passing yards for a total of 778 total offense yards.

The Skyhawks had a total of 99 yards, 41 rushing, and 58 passing. The Bears finished with 40 first downs while Point had four.

Point will host Campbellsville University in the Skyhawks’ home opener on Saturday, Sept. 11, inside Ram Stadium. Game time is scheduled for 1:30 p.m.

All local first responders and veterans are invited out to Saturday’s home opener and will be recognized for their dedicated service during the game.