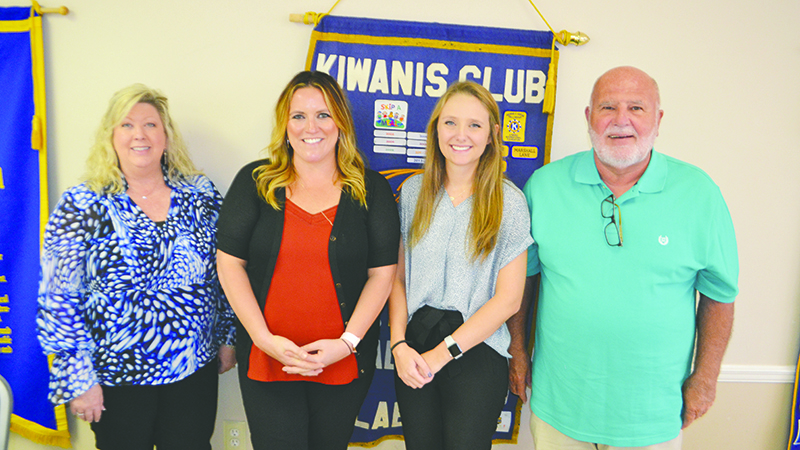 Chambers County Development Authority (CCDA) office manager Cori Cook and project manager Ansley Emfinger (at center) were guests of the Kiwanis Club of Valley at Wednesday’s noon hour meeting. Emfinger said she’s heard her dad, Bruce Emfinger, talk about economic development all her life, and it was natural for her to have a career doing that. Internship programs during her time in college prepared her to meet the challenges of doing that for a living.

Ansley Emfinger has been all over the state of Alabama since her graduation from Valley High in 2016 but counts herself fortunate to be back home as a project manager for the Chambers County Development Authority (CCDA). She first went away from home to attend the University of Alabama in Tuscaloosa, where she earned a degree in business with an emphasis on economic development. She earned her degree in 2020, taking online courses the final three months because of the Covid-19 pandemic.

She talked about her going away and coming back home experience at Wednesday’s noon hour meeting of the Kiwanis Club of Valley. She was accompanied to the meeting by Cori Cook, the CCDA’s office manager.

Emfinger said that the importance of economic development for Chambers County comes naturally to her.

“My dad (Bruce Emfinger) has worked for it and talked about it all my life,” she said. “I grew up around it. He was a very good mentor for me.”

She tailored her college education and internship opportunities around economic development at many different locations in the state. Going into her senior year at UA, she was among five students to participate in an internship program with Alabama Power.

“We were able to work at five different locations in the state,” she said. “At one location, I was asked if I had had any experience in gathering data. They showed me the different tools I could use in pulling it up. I quickly found out that it was something I absolutely loved. Everywhere I went on that internship the people I worked with were great, and they were so helpful. I was so fortunate to have had that opportunity.”

Following graduation, she was hired to a position with the Elmore County Economic Development office in Wetumpka.

Elmore County is located where the Coosa and Tallapoosa rivers meet to form the Alabama River. Lake Martin and Lake Jordan aren’t far away.

“We promoted tourism a lot, and fishing tournaments were a big part of that,” she said. “It was a very interesting time. Elmore County reminded me a lot of Chambers County. People from different towns worked well together. I want to go back to Wetumpka some day to see how it has changed since I left.”

Something unique about being there was an opportunity to see the production of a TV series. Ben and Erin Napier’s Hometown Takeover has given new life to Wetumpka. People have watched on HGTV as the town takes on a new look through a revitalization program.

Emfinger had long dreamed of having an economic development position in Chambers County. That opportunity opened up when Kimberly Carter left the staff when she and her husband moved to Alexander City. Ansley had interned with the CCDA while in high school and again in college. She knew she’d like to be there as a full-time professional if that opportunity ever opened up.

“My past experiences shaped and m0lded me as a person,” she said. “I’m back home now. I can’t tell you how great it is to live and work around people I grew up with. I am really excited to be here and to have the opportunity to work in the fields of workforce development and promoting existing industry. I also have the chance to do data analysis, something I have grown to love.”

“Chambers County commissioners Sam Bradford and Debra Riley did a great job in getting the word out about how important it was to get a maximum response,” Emfinger said.

“We offered a lot of free ice cream, too at those meetings,” said Cori Cook, getting some laughter.

Emfinger is proud of the fact the CCDA was recently one of only four economic development offices in the state to have received an innovative initiative award.

“It’s a really exciting time for Chambers County right now, and I am glad just to be a part of it,” she said.

The Lanett airport is on pace to reopen by the end of the current calendar year. What was not long ago an airport with a runway only 3,100 feet in length will then have a runway of more than 5,400 feet. With a runway more than a mile in length, it will be one of the largest in east Alabama. There’s a good chance it could be reclassified by the FAA as a regional airport.

The new million-dollar terminal is a huge boost to Chambers County economic development. The Lanett airport will be one of few locations anywhere where business executives looking for places to expand can fly in, land at an airport and taxi up to an economic development office. All they have to do is walk from the plane to an office in the terminal where they can talk to the CCDA about what Chambers County has to offer.

A member of the club asked Emfinger how her dad, a huge Auburn fan, felt about her going to the University of Alabama. He said that he had been very supportive of her getting a good education wherever she could do that. She said she had fallen in love with the Tuscaloosa campus and the university’s college of business on trips she made there during high school.

She said that her dad had been open-minded enough not to wear the Auburn colors when he visited her at college.

“He wouldn’t wear crimson, but he did wear green,” she said.