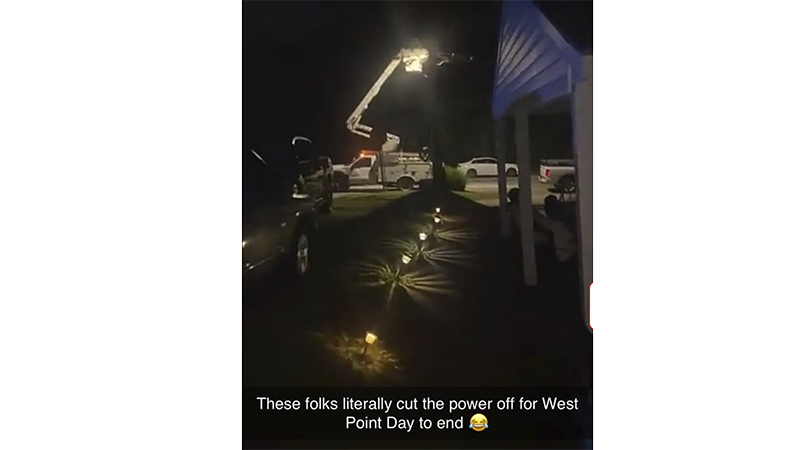 The City of West Point has apologized after it cut off electricity to approximately 35 structures Sunday to disrupt a public gathering that was blocking city streets.

City Manager Ed Moon said Tuesday that an “unpermitted event” was in the area of East 9th Street.

“At approximately 8 p.m., the gathering was blocking city streets with parked cars and pedestrians, and more people were entering the area,” Moon said in an email. “The situation was deemed unsafe by police department personnel due to the inability for emergency services to respond to assist and the presence of unlawful activities. It was of great concern that someone would be injured if the crowd continued to grow.”

Moon said the police department declared a public emergency and asked the utilities department to cut off the power to the main area of the event.

“The utilities department responded and cut the power off that affected approximately 35 structures at around 8:45 p.m.,” Moon said. “The power was off for 50 minutes, and several homes were impacted by the outage. The city apologizes for any inconvenience that this outage caused to the residents in the area. While this action did assist in disbursing the crowd, more consideration should have been given to the impact of the outage on the local residents.”

West Point resident Aniya Cofield was one of the residents who lost power. Cofield is oxygen for COVID-19 related pneumonia.

According to Aniya’s husband, Henry Cofield IV, when the power went out, he walked out the front door and found police officers and utility workers outside.

“They cut the power off right in front of my house,” he said. “So when the power went off, I walked out the door, and they were out there.”

Henry said he told the officers that his wife was on oxygen. The Cofields had allegedly received no warning that their power would be cut off.

He explained that the tank would work without electricity, whereas Aniya had been dependent on an oxygen machine that used electricity.

Henry wasn’t sure why the police officers were there.

“There was a block party going on, like two blocks over from my house,” Henry said. “My street was clear.”

“I’m considering doing anything I need to do, because what they did last night was very inconsiderate,” Aniya said. “I mean, you all didn’t hurt the people that was out here in the street. You hurt people that was in their homes sick. So that should have never happened. Whoever made a call like that, they made a real bad call.”

Aniya said that the electrical workers continued cutting the power off after her husband told the police officers she was on oxygen.