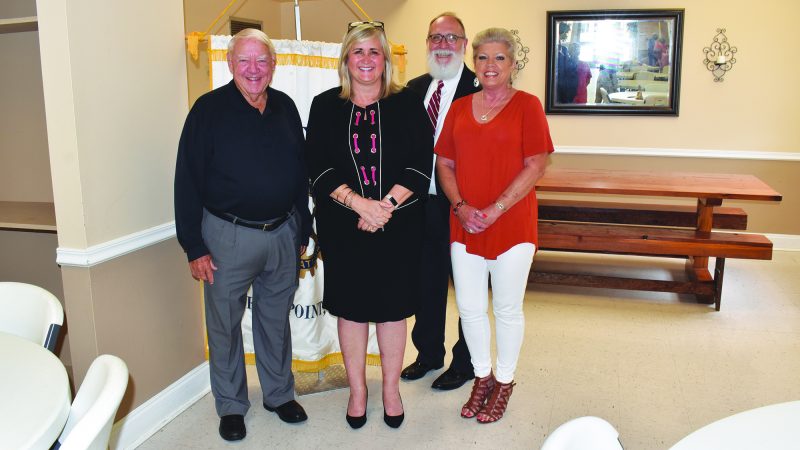 Greg Ward, a Lanett-based attorney and editor of The Alabama Lawyer who said he invited Stewart, introduced the program. He explained that many people don’t know that Alabama Supreme Court justices have to be elected by voters.

“We think of [Alabama Supreme Court judges] as good and wise and smart and wonderful,” he said. ‘Some of them are not. A judge is nobody but a lawyer who’s got their politics right, and they get the job. That’s what it really is.”

Ward said he’d known Stewart for a while.

“She went to law school at Vanderbilt,” he said. “She was a circuit judge who was appointed by a Republican, by Governor Riley, down in Mobile. She ran unopposed three times. At the end of that, the circuit judges got together, and they named her as head of the circuit judges association, the first female to ever have that in the state of Alabama’s history. … Then she ran against a guy who was already appointed by a different governor for the Supreme Court. And she ran against the nice guy and beat him as a Republican.”

Ward said Stewart will be up for reelection in the “not too distant” future.

“Rumor has it that she’s running for chief justice when our current chief justice retires,” he said. “She’s not announced it. Just rumor has it. And if she does run, I think she’ll have a great reception.”

Stewart said that how the Alabama Supreme Court works is “kind of a mystery” to many outsiders.

“When I ran, I wasn’t really sure how it all works, myself, before I got to Montgomery,” she said. “So I want to sort of explain all of that. The main key that I want ya’ll to walk away with is that you are being served very well by the Alabama Supreme Court. We have nine, actually Republicans from all different walks … We all understand that we are the leaders of the judicial branch, but we’re also here to serve everyone.”

She said that a part of serving her constituents is being accessible and transparent, which was why she wanted to explain the inner workings of the Alabama Supreme Court. She explained that Supreme Court justices are elected at large, meaning without districts.

“We don’t actually make the law; we interpret the law because that would be the legislative function,” Stewart said. “What we do, we really try to do it right. We have a lot of conscious, deliberative process that we are only looking at the case that’s in front of us, the facts that are in front of us, and the laws that apply to those facts. We’re trying really hard not to make law, not to be the kind of judges that whether you’re a big Democrat or a big Republican, you don’t want an activist judge on either side. And so we try really hard not to be those people.”

She said that a supreme court justice has to convince at least four other justices to go along with their proposed opinion, which creates a good check and balance system.

“So what we hear are cases that come really from three kinds of areas,” Stewart said. “You might have a case that was heard in Chambers County — let’s say a car wreck case that Judge  Isaac Whorton [heard]. And one side or the other thinks that the judge failed to charge the jury correctly or lets an impermissible piece of evidence come in. So they’re going to appeal that up. We call that a direct appeal. And that’ll come directly to the Supreme Court, and we’ll look at that.”

Stewart said Alabama has two intermediate appellate courts — the Court of Criminal Appeals and the Civil Court of Appeals.

“Any criminal case that comes through our system goes to the Court of Criminal Appeals first,” she said. “We don’t hear any direct appeals, like I was explaining about the car wreck. … So after the Court of Criminal Appeals has looked at [a case], we have an opportunity or the parties have an opportunity to come to the Supreme Court and say, ‘They got the law wrong. Here’s some case law that says this; they decided that. That’s a clash in the case law. Please look at this.’ We call those cert petitions or certiorari petitions.”

Stewart said cases can come to the Supreme Court from the Civil Court of Appeals in a similar manner.

She said cases can also come to the Supreme Court through mandamus petitions.

“Basically, a mandamus petition is if you’re in the middle of the case, and Judge Whorton has said, ‘You are allowed to have this discovery,’ and one of the parties thinks that they shouldn’t be able to get that discovery or they should have gotten it and he says no, they can petition the court for immediate, extraordinary relief. And that’s what a writ of mandamus is for. The judges messed this case up, and it’s so prejudicial that we can’t really go forward, and we need you, Supreme Court, to look at this in an emergency, extraordinary manner and make a decision about this piece of this case right now.”

Stewart said once the Supreme Court decides to take on a case, it’s split up into two divisions.

“And the first sort of run at a proposed opinion or proposed resolution for a case is going to go to just your division,” she said. “So, we’ve got nine justices. So on one side, we’ve got four justices plus the chief. On the other side, we’ve got four justices plus the chief. Because the idea is, if you can get five people in a division to agree with you, you don’t need to present it to the entire court because you got the five votes you needed for a majority. But if any one person says they don’t agree in your division, the entire court has to look at that.”