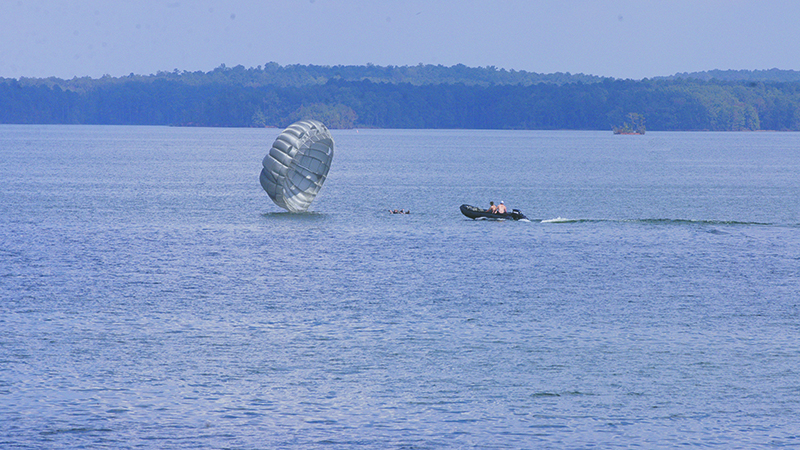 The U.S. Army held a training exercise at West Point Lake on Friday. Several areas of the lake were closed as the training session took place.

WEST POINT LAKE — West Overlook was a crowded place from mid-morning to early afternoon on Friday as friends, family members and relatives of U.S. Army soldiers gathered to see some parachute jumping over West Point Lake.

Soldiers from the 507th Infantry Regiment from Fort Benning jumped out of helicopters into the deep-water portion of the lake east of Anderson Park.

“That’s my baby!” yelled one excited mom as her son slowly descended to a splashdown.

The training exercise was well coordinated. The helicopters took eight jumpers at a time and headed to a drop zone where rubber raft boats encircled the area where the parachuting soldiers safely splashed down. The guys in the boats motored to the landing spots to pick them up.

An estimated 80 soldiers participated. Some were aboard the helicopters and flew north along the Chattahoochee River from Fort Benning. Others arrived by military bus.

The road across the top of the dam, the powerhouse road and Anderson Park were closed during the training exercise. West Overlook remained open and provided an excellent viewing location, especially for those with binoculars and long-lens cameras.

West Point Lake was chosen for this one-day training exercise because it provides a large area for safe landing in the water and adequate land-based areas for staging purposes.

The 507th Regiment is with the U.S. Army Infantry School at Fort Benning. It is part of the Airborne and Ranger Training Brigade, which includes the Army’s Basic Airborne School, Jumpmaster School, Pathfinder School and the much-heralded Silver Wings Command Exhibition Parachute Team.

During the height of World War II, the 507th Regiment was formed at Fort Benning in July 1942 and saw action on D-Day, the Battle of the Bulge and in an airborne crossing of the Rhine River into Germany in 1945.