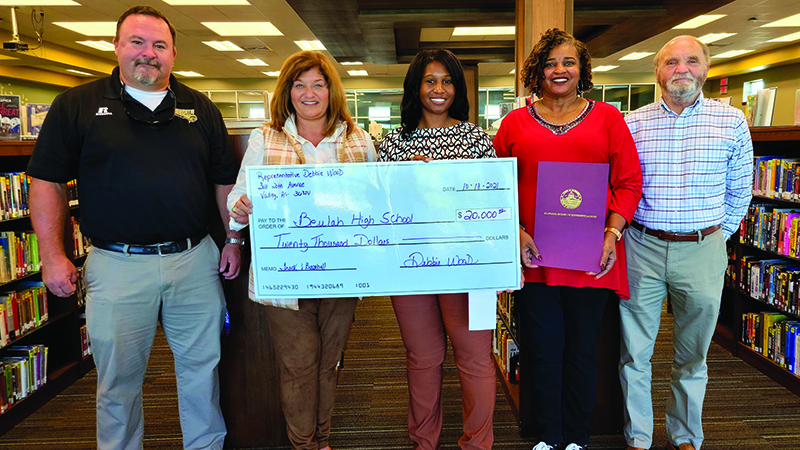 On Monday, Beulah High School received a grant of $20,000 to use for its baseball team and future track. The donor was Rep. Debbie Wood, who serves Alabama’s 38th district in the Alabama House of Representatives.

Wood said the school holds a special place in her heart because she graduated from Beulah High in 1984.

Wood said she became interested in helping the school build a track during a visit last year with Sen. Randy Price to give the band grant money for new uniforms.

“While I was there, I was walking with counselor [Veronica Flakes-] Jefferson, and she told me that the students at Beulah High School have to board a bus, and they’re driven to Beauregard High School, where they practice track,” Wood said. “They don’t even have a track at their school to practice track and field. And it just made me feel horrible that students are being bussed to another school.”

Moved to act, Wood called Lee County School Board Member Roger Keel, who represents District 4, as she knew he was a runner. She shared her thoughts with him on Beulah High School’s lack of a track. Keel then communicated the issue to the board of education, which is now looking to purchase land for a track. Wood said $15,000 of her donation will be used to create the track. Meanwhile, $5,000 will go to Beulah High School’s baseball program.

“We certainly appreciate everything Ms. Wood has done for Beulah High School,” Keel said. “She’s been a great asset to our school.”