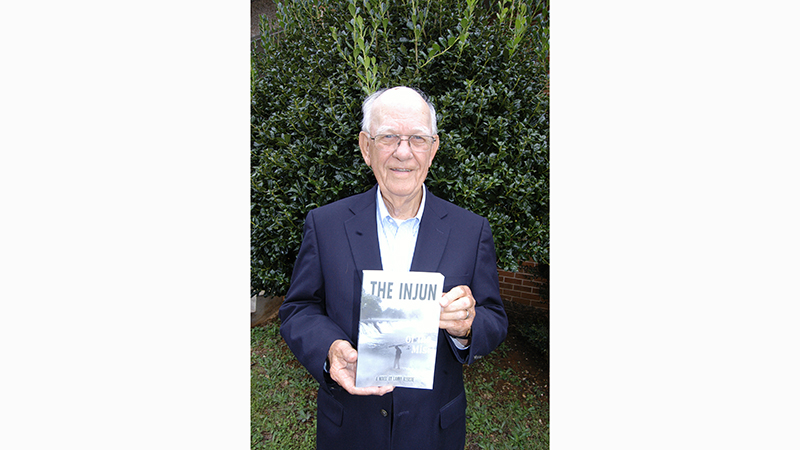 Book signing on Saturday: Lanny Bledsoe (above) will be signing copies of his new book, “The Injun: Out of the Mist,” this Saturday at The Fairfax Village Antique Market.

VALLEY — Lanny Bledsoe has published the fifth novel he has written since the spring of 2020. It’s titled “The Injun: Out of the Mist” and is available at Amazon. Copies are now available at Lee Maples’ Fairfax Village Antique Mall, located in the former Taunton’s Hardware building. Bledsoe will be signing books there this Saturday, Oct. 23 from 10 a.m. until 2 p.m. EDT.

This book is different from Bledsoe’s first four novels in that it’s not centered around the community of River Bluff and the people who live on the Georgia side of the river. It’s instead about the experiences of River Bluff native Floyd Wimms on a journey up the Chattahoochee River by motorboat.

He had lived with the Cherokee Indians in western North Carolina in the recent past, and he was headed that way to spend another winter with them.

A number of obstacles sidetrack him, and he never makes it that far.

“I took one character (Wimms) from my fourth book and based my newest book on him,” Bledsoe said. “It’s a stand-alone book. You don’t have to be familiar with the first four books to understand it.

He wants to go back and spend some time with the Indians and gets swallowed up by a number of situations.”

One of those situations involves a young woman named Sister he had a chance meeting with in a bar. She was there with two men with mischief on their minds. Both were armed and looking for trouble.

They first got into a squabble with a female bartender, and when Wimms interceded on her behalf, they tried to settle it with guns.

Wimms shot and killed both of them in self-defense. Sister believes that Wimms had saved her life and that her place is now with him. She’s obsessed with being with him and follows him everywhere he goes. It’s a big problem for Floyd.

Wimms had had an eventful life even before this latest motorboat trip up the Chattahoochee.

He had been born in a shack on the river not far from River Bluff. His parents were dirt poor. Luckily, two local men took him under their wing and taught the ways of the river and the people who lived near it. When he was 18, he served in the U.S. Army in World War I.

He went through the deprivations of trench warfare and returned home older but not wiser. He got himself into a host of trouble, most of its over women, and had to leave town ahead of a posse led by an irate husband.

On his first trip up the river, he made it as far as he could go by boat and then walked to the Smoky Mountains to befriend the Cherokees. He spent two winters with them before going back to River Bluff.

He was wearing buckskins and furs when he made it back home to Alabama.

That’s how he got the nickname Injun.

Once again, he gets in a conflict over a woman, and he has to leave town. His new challenge up river is to deal with Sister, the young woman who thinks she belongs to him.

“Sister is a girl he saved, and she is following him everywhere he goes,” Bledsoe said.

Wimms doesn’t make it to North Carolina, and he doesn’t get back to River Bluff. He tries over and over again to get away from Sister but eventually gets back to her. She tells him that papers have to be signed and notarized for her to be with him. He agrees.

The book ends with her saying, “Let’s go tell daddy the news.”

Bledsoe is now at work on a sixth book. It’s a story loosely based on the memoirs of his great grandfather, William C. Bledsoe, who had served in the Southern army in the Civil War.

A LaFayette resident, W.C. Bledsoe joined the Confederate cause in 1864, saw action in the Shenandoah Valley and in the 1865 siege of Richmond. He was with the army at Appomattox the day Lee surrendered and saw Lee and Grant arrive separately at the McLean House to agree to the terms.

The book Bledsoe is writing has a fictional character experiencing that and then getting back home to River Bluff to see a new textile mill go into production in 1866.

Bledsoe once served as the superintendent of Riverdale Mill and is thoroughly familiar with its history. For years, the state line was both a blessing and a curse. Many couples got married on a stairwell on the mill’s easternmost end, which was in Georgia.

At the time, they could get a marriage license faster in Georgia than they could in Alabama.

Having a mill in two states was a major headache when it came to paying state taxes. Eventually, it was agreed that for tax purposes the mill was entirely in Alabama.

Bledsoe said the he really enjoys writing. “It’s something for me to do,” he said. “I got started during the Covid-19 shutdown. My wife, Karen, and I still stay indoors a lot and that gives me the chance to keep writing.

The books have sold well in the local area, but it’s hard to get national acceptance.

The books have gotten lots of positive reviews from all over.

People from all over the country have contacted me telling me they like my books and that they want me to keep writing.”