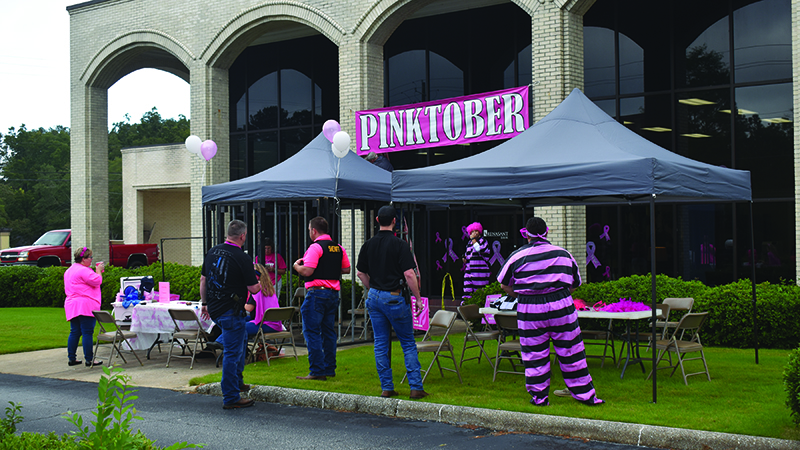 Another success: Volunteers are shown getting ready to start the fifth annual Pinktober event. The event brought in more than previous years.

On Friday, Oct. 8, in partnership with local law enforcement, Renasant Bank in Valley hosted its fifth annual fundraiser for the Breast Cancer Research Foundation of Alabama. On Wednesday, bank manager Nancy Warren-Holland revealed that the event raised $11,105. She had only hoped it would raise $5000 to $6000.

“This year, we far surpassed our goal and simply crushed preceding years,” she said.

“I think the change [in fundrasing] this year was [due to] how we did it,” she said.

She explained that in the past, the fundraiser had various people raise money at different times throughout the month.

“Last year, we just had the one event,” she said. “But because of COVID, it was right after the sheriff’s rodeo, so people already had given so much.”

During the fundraiser, volunteers pretended to be locked up in a jail in front of the bank. People were asked to donate money to pay for the prisoners’ bonds. Warren-Holland said that this year the goal was to have each pretend prisoner raise $100. Event organizers figured that if fifty people volunteered as prisoners, the event would easily raise $5,000. What they didn’t count on was that some volunteers would raise over $100 each.

“For instance, I had a mortgage originator from our Montgomery area come that morning, and I literally just met him, shook his hand and put him in jail,” Warren-Holland said. “Just that man came up with almost $500 via our online link. Becky Nelson raised $705 from change buckets at Daniels. Another lady lost her mama to breast cancer and brought us a check for $1000.”

She said it was “an awesome thing” to watch volunteers have fun raising money.

“I’ve always known the Valley community had a heart of gold, and every year that we have done this particular fundraiser, they prove it over and over,” she said.

Renasant Bank is still raising money for the Breast Cancer Research Foundation of Alabama. On Thursday morning, they had raised $15,270 of their $30,000 goal.

The link to donate is https://bcrfa.networkforgood.com/projects/139995.