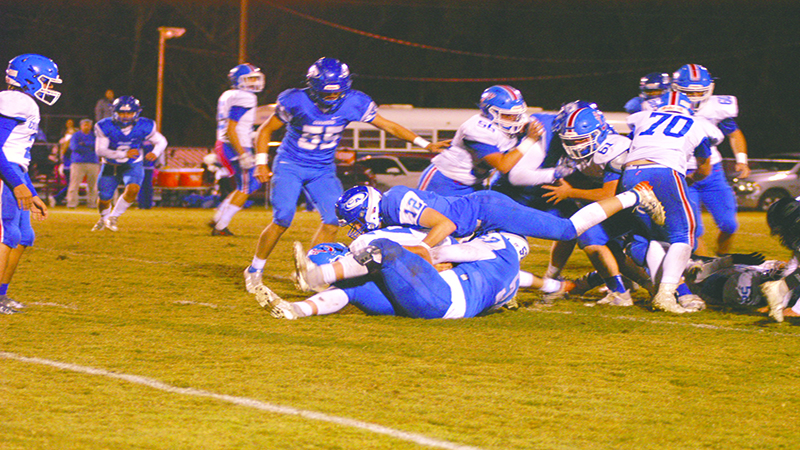 LaFAYETTE — The Chambers Academy Rebels raced out a 38-0 halftime lead over the Crenshaw Chrisitan Cougars and never looked back on their way to a one-sided win Friday night at Torbert-Allen Field. The Rebels added one more score in the second half to win the game 44-0.

It was senior night at Chambers. A total of 20 seniors played their final regular season game.

“It has been a joy to coach them,” said Chambers Academy head coach Jason Allen. “They have meant a lot to our program. They are a very dependable group. They know what to do in any situation.”

Allen said his team played its best game of the year on Friday.

“It was good to see Jordan Benbrook have a good game,” Allen said. “He has been injured for much of the season, but he’s back healthy again. We will need him for our playoff run.”

Special teams came up in a big way with two blocked punts setting up scores.

“Special teams are an important part of any game and really were tonight,” Allen said.

Chambers was completely dominant on offense, defense and special teams. Crenshaw didn’t make their first first down until late in the second period and that was on a penalty. The Rebels scored every time they had the football in the first half.

After holding the Cougars to a three-and-out on their first possession, Chambers put the ball in play on their 31 and found the end zone in just three plays. Quarterback Jo Jo Hendrix and wideout Jeremy “Spud” Conway hooked up on a 19-yard pass play on the Rebels first offensive play. The pass down the left sideline advanced the ball to midfield. Benbrook gained seven yards on the next play, and on second and three from the 43 T.Y. Trammell ran wide right and found plenty of running room down the visitor sideline for the first score of the game. The 43-yard run gave Chambers a 6-0 lead. The point-after failed, leaving the score uncharged with 8:43 showing in the first quarter.

Crenshaw couldn’t move it on their second possession and punted on fourth and six. The kick spun to a halt on the Cougar 32.

It took the Rebels just one play to make it 12-0. Hendrix found John White running in the open on the right sideline and hit him with a perfect pass. Just like that, Chambers had a two touchdown lead with 6:01 left in the opening period.

It would only get worse for Crenshaw.

After their third straight three-and-out, the Rebels put the ball in play on their 40 and scored again in just three plays. Benbrook gained three yards on first down, a pass from Hendrix to Trammell advanced it to the Cougar 38, and on the third play Benbrook blasted through the right side of the line and ran 38 yards to the north end zone for a third Chambers TD in the first quarter. Cayden Haley’s PAT made the score 19-0 with 2:20 left in the opening period.

The Rebel defense held the visitors to a fourth straight three-and-out and gave the Rebel offense great field position when senior defensive end Kross Colley partially blocked a Cougar punt. The ball went out of bounds at the Crenshaw 46.

Passes from Hendrix to Conway and White moved the ball deep into Crenshaw territory. From there, junior running back Gavin Kight ran 18 yards around left end for an apparent score. It was called back on a holding penalty. That put the ball back on the Cougar 33, but on the next play the Rebels were knocking on the door once again when Benbrook ran it off the right side all the way to the three-yard-line. Two plays later, Benbrook scored on a run around left end. Haley’s second straight successful point-after try made the score 26-0 with 9:42 left in the first half.

The Rebels got their next score on the game’s longest play. After a Cougar punt and a penalty, they put the ball in play on their 15. On the first play from there, Trammell took a pitch around right end and was very quickly running in the open down the home sideline. Some 85 yards later and the Rebels had another score. The point-after failed, but with 6:38 left in the half, Chambers was ahead 32-0.

The Rebels added one more score on a blocked punt. Senior lineman Ryan Smith blocked it, and senior linebacker Ashton Chambers caught it on a bounce and ran it back 26 yards to make it 38-0 with 3:58 still to go in the half.

Chambers will be hosting Wilcox Academy next Friday night in a first-round playoff game.

“They are a spread team with an athletic quarterback,” Coach Allen said. “We have played them several times in the past. We need to be prepared for what they do. You have to keep winning to keep playing. Lose and your season is over.”