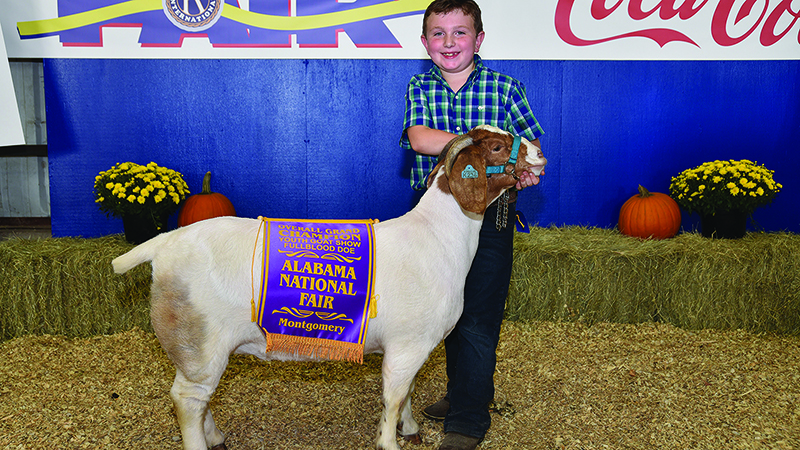 She explained that in the fullblood doe competitions, goats were judged according to their ages, for which there were three categories: yearling, junior and senior.

“What they’ll do to get the grand champion is they’ll bring in anybody that got first or second in the yearling and the junior and then the senior,” she said. “So, all of the top goats are all against one another in the ring. So that’s how he got the Overall Grand Champion Fullblood Boer Doe.”

Wilson said that the goats in these competitions were judged for how well-bred they were.

For the Beginner Showmanship competition, the judge focuses on how well the exhibitor moves their goat around the ring, how well they maintain eye contact with the judge, and how well they set their animals.

“They’ll come into the ring and do kind of the half circle, and then they have to stop and make sure that their legs are in the correct place and that their neck — kind of like how you see in dog shows — they set them up on that pedestal…” she said. “The exhibitor is a big part in making sure that that animal is set up the correct way.”

Wilson said that before the Beginner Premier Exhibitor competition, participating children are given a written exam.

“They have to answer questions about raising goats and about goat production, whether it’s a dairy goat or a meat goat,” she said. “And then there’s also a part of that written exam where they do some judging. Like they’ll bring in four animals, and there will be a moderator who says, ‘Which one of these has the widest flank?’”

Walton’s father, Blake Epperson, said he was very proud of his son and that Walton was very excited to win his awards.

“He’s been showing goats since he was three years old,” he said. “He started for the first time when he was at the Lee County Fair in Opelika.”

Blake said his family has a small farm just north of Opelika on U.S. 431.

“My wife [Lybbi Epperson] grew up showing livestock,” he said. “I didn’t, but we just kind of wanted to introduce him into it, and that’s kind of how we started. We bought a couple of goats.”

“We’re actually going to Autaugaville this Saturday to another show,” he said.

Blake is in the third grade at Lee-Scott Academy in Auburn.