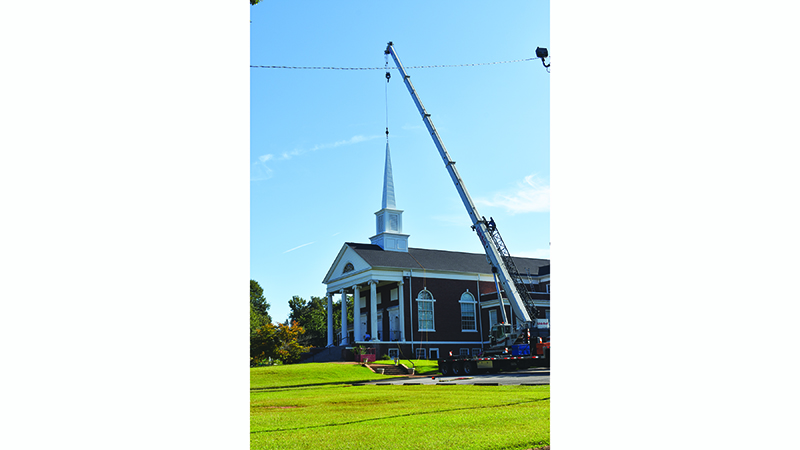 People in the Fairfax community in Valley may have noticed work being done on Fairfax First Baptist Church Friday morning. A pristinely white steeple hung from the arm of a very tall crane. According to church historian Patti Barnes, the steeple had recently been refurbished.

“This is the third steeple that we’ve had,” Barnes said. She said that the previous steeple had been erected in the mid 1980s.

Sherry Davis, building and grounds chairperson for the church, explained that the aluminum frame on the inside of the refurbished steeple was old, but the outer paneling had been replaced. The previous steeple was off-white, which church leaders didn’t like, and covered in lichen.

Pastor Mark McGee said he was excited about the refurbished steeple.

“Sherry and the building committee did a lot of work for it,” he said. “And you know, it’s just a beautiful church. And the steeple needed some upgrading, and so, it’s a sign to me this church is going to continue to minister to this community for generations to come. … The steeple just points to the glory of God, and that’s what we’re trying to do.”

A company based in Kentucky, Campbellsville Industries, Inc., was responsible for refurbishing the steeple. The crane putting it back in place was from MB Cranes based in Fortson, Georgia.

On the porch of the church sits its original steeple, dated 1938. Davis told the story of how an antique retailer bought it for $25, and Barnes bought it back for $75 to keep as a memorial of when the church was started.

“And then, one of our members was really good at woodwork, so we asked him if he would put this steeple on this woodwork,” Davis said.

Barnes said the church held its first service in 1938. She said before the church was built, people of multiple Christian denominations — Baptist, Methodist, Church of the Nazarene, and Christian — attended the nearby Union church.

“They did that for a number of years until they could save up enough money to build a new church,” Barnes said. “And the Nazarene group was the first one to move out and build their own church. Then the Methodists moved out and built their own church. And then we moved out around 1934, 1938. And we built this church. And the Christian denomination stayed in the Union church.”

Community members will enjoy fall festivities at the church during its Hallelujah Festival on Saturday, Oct. 23 from 3 p.m. to 6 p.m. There will be inflatables, games, hot dogs, a train ride, and live music by local artists. Guests are encouraged to bring their own chairs. Trunk or treating will start at 5:30 p.m.

Anyone wanting to host trunk-or-treating in their vehicle should call (334) 756-3077 and bring their own candy.