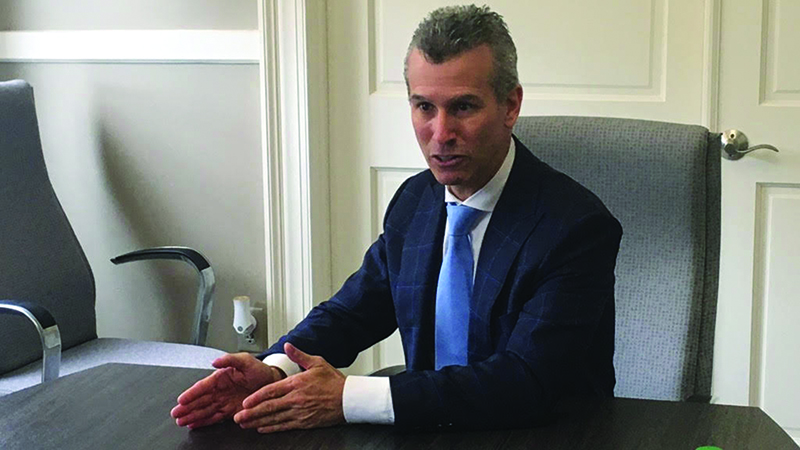 School safety: Max Schachter, father of a student who died in the 2019 shooting at Marjory Stoneman Douglas High School, spoke in LaGrange Wednesday.

The father of one of the 17 victims at Marjory Stoneman Douglas High School in Parkland, Florida spoke Tuesday night in LaGrange, hoping that sharing ideas, failures and his experience might prevent another tragedy like that from ever occurring.

Max Schachter, the father of Alex Schachter and executive director of Safe Schools for Alex, spoke at Hollis Hand Elementary at an event sponsored by the LaGrange Police Department and Troup County School System. Schachter’s speech focused on the goals of the safe schools nonprofit, which are to create safer schools; honor his son, Alex; and relay the lessons schools around the country can take from the tragedy.

“I think it’s really important whenever I give these presentations to talk about the failures that happened in Parkland. That’s why I’m here. That’s the mission that I’m on,” Schachter said during his two-hour long presentation to the community. “We cannot make schools safer if we don’t learn from our lessons of the past.”

The Troup County School System has quarterly drills and several policies in place to be proactive to prevent school shootings. Steven Heaton, the school safety coordinator for TCSS, said Tuesday that compared to other districts he believes the school system is a little ahead of the curve.

The software would streamline communication throughout the school system and help maintain a record of student’s actions that are considered a threat or problematic.

The school system will also be implementing the Centegix alert system within the next month. This system includes a badge that allows teachers the ability to activate an alert, whether it be a health or school safety emergency, in real-time. It also allows law enforcement and the school system the ability to manage an active situation.

Heaton said there were several areas for improvement regarding school safety in the TCSS. This included better labeling for surveillance cameras and working to promote effective communication with students, parents and faculty.

One topic addressed was what parents can do to aid in school safety. Schachter said in an interview with The LaGrange Daily News that he gets asked that a lot.

“I would tell them to mobilize and band together with other parents, other similar-minded parents that are concerned about school safety. And don’t be afraid to advocate for school safety in your community,” he said.

“Facebook has been very, very effective for the Parkland families. We are not shy about the way we feel online. And I think school districts respond to that.”

A phone app that would function as a tip line for the schools was one proposed solution to promote school safety. The LPD or Troup County Sheriff’s Office is currently the best way someone could report concerning behavior. This app represents a core aspect regarding school safety that is shared by Schachter and the LaGrange Police Department.

“We teach our kids, our students that if they see something, say something. Don’t wait until somebody else does it. Don’t assume somebody else is going to do it,” Heaton said.

LPD Police Chief Lou Dekmar said the police department continues to work closely with the school system to be proactive and reactive to the situations as they arise.

“The drills and the protocol that the schools adopted with our counsel and guidance, and those internal exercises that they do quarterly and then the interfacing that we have with our cars and the camera systems, I think we’ve taken advantage of every technical opportunity that the school has got or that we can offer,” Dekmar said. “So, in that regard, [we’re] pretty confident about our ability, not only to respond because we train frequently, but also our ability to preemptively identify and address threats.”

Information regarding school safety and Schachter’s nonprofit, Safer Schools for Alex, can be found at www.safeschoolsforalex.org.