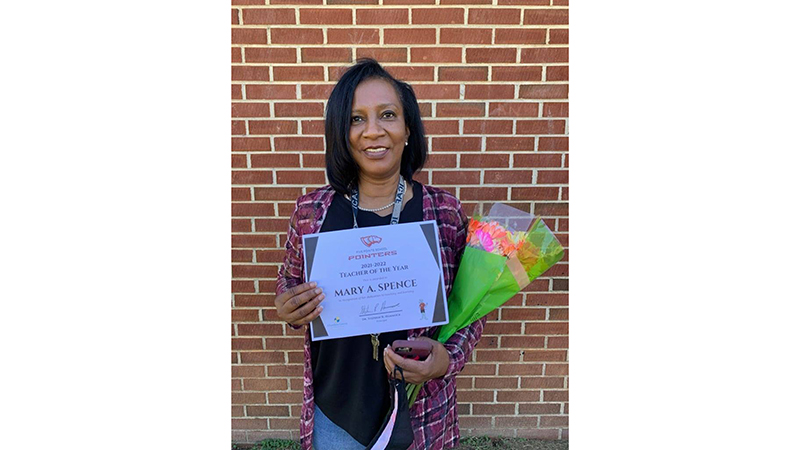 The school credits Spence with delivering research-based instruction and having her students analyze their performance data, helping them see what they can improve on. She helps students understand lessons by pointing out real-world applications. Her students often work collaboratively to demonstrate mastery of standards.

Spence said her students just finished with an egg drop competition, in which students had to design parachutes that would keep eggs from cracking. Now, they have to design cars to safely hold eggs. After that, they’ll have to design suits for eggs to insulate them against being torched. Spence said the latter experiment will simulate objects entering Earth’s atmosphere.

Spence said she started her teaching career at Five Points School around 2010 or 2011. Before that, she was a production manager for Procter & Gamble. She finds her current job far more fulfilling than her previous one, “no question about it.” She thinks coming from a corporate background has shaped her teaching style.

“At the end of the day, you have got to have something to show for what you’ve done,” she said.

Spence said she often asks students for feedback and isn’t afraid to do things differently from how she usually does them. She said she’s open about her mistakes and shows her students a can-do attitude towards fixing them.

“I’m really big on letting them see that sometimes I don’t get it right,” she said.

Spence is currently designing and creating the school’s STEAM Lab.

“About three for four years ago, I sort of promoted the idea of putting together a lab after I had looked at another school and seen some of the things they had done,” she said. “And I was fortunate to go into a workshop, and I saw 3D printers and fell in love with them.”

The lab now has 3D printers and an aquaponics unit in which plants are fertilized by fish.

Spence said she plans on allowing elementary students to write code to control a robot in the lab. Middle schoolers currently write code for a more advanced robot.

In the future, the lab will have an area for students to read and another for them to look through microscopes.

Spence said her favorite thing about teaching is seeing students gain confidence in the subjects she teaches.

“That’s the best thing, when they come in, and maybe they’re not sure what they’re going to learn, or maybe they told you that, ‘I hate math. It’s my least favorite subject,’” she said. “And then, when they leave [and say], ‘I kind of like math now.’ It’s always a plus when you hear that.”

Spence said she wasn’t surprised to win the title but felt humbled that her peers thought she was deserving of it.

Her favorite subject to teach is math.

“I like sitting there with a problem and trying to figure it out,” she said.