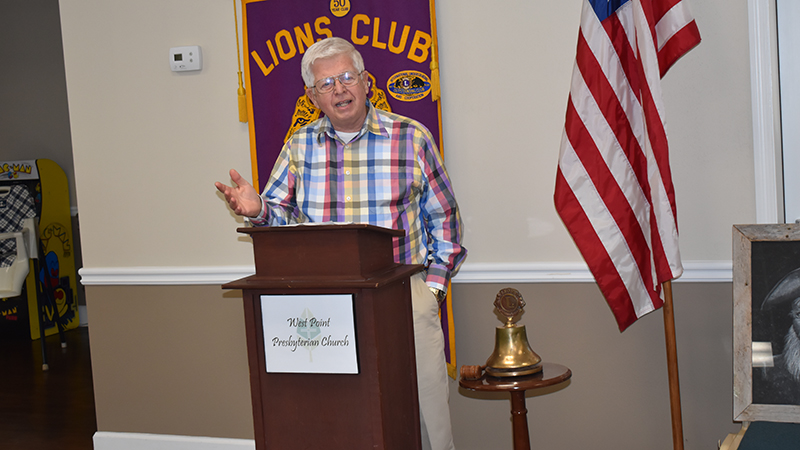 Talking missionary work: At the West Point Lions Club meeting on Wednesday, the Rev. Mike Robinson recalled his work as a missionary and how it had changed him.

On Wednesday, the West Point Lions Club enjoyed a moving speech by former pastor and missionary the Rev. Mike Robinson. His overall message was that he went with God’s plan for his life and was glad he did.

Robinson began his religious journey as a child, when he’d sit under a tree wondering what life was about. He attributed this to God’s grace working through him. Robinson began his career as a pastor in 1970. He and his wife, Kathy, had a small church in southern Illinois.

Robinson said he was studying and soon to graduate as a commercial artist when he attended a missionary rally. He was moved by a slide he saw of a woman in front of a grass hut.

“A lady was sitting on the step, had a little child with her, a little baby in her arms,” he said. “God says, ‘You can go and tell people about me.’ And I said, ‘Let somebody else do it.’ I didn’t want to be a missionary. I was going to be a commercial artist.”

“See, sometimes, if we really want to be in the center of the Lord’s will, it’s not what we want to do; it’s not the great plans that we have,” he said. “Even the sacrifices that we’re willing to make. Am I willing to do what Paul said in Galatians — keep in step with the Spirit?”

Somewhat reluctantly, he decided to be a missionary. He said the worst year of his life was 1984, when he went to do missionary work in Costa Rica. In the United States, he had been a fairly successful and well-loved pastor. In Costa Rica, he was suddenly in a place where he couldn’t speak the local language, didn’t have a vehicle and lived in a small apartment.

Robinson said to be a missionary, you have to have a sense of humor. He said that he didn’t learn to understand Spanish well from his missionary work in Spanish-speaking countries, though people told him he would. One time in Honduras, he asked a grocery store worker for chicken by imitating the animal. He said she laughed very hard.

Overall, Robinson enjoyed his time in Honduras. However, he was amazed by the lack of abundance there compared to abundance in the United States.

Robinson got emotional when he recalled needing paint for a new church. The hardware store he went to only had one gallon of aqua-colored paint, whereas he wanted white paint. When he got back to the States and went to a hardware store, he was overwhelmed by the variety and abundance of paint there.

He said he believed God had blessed the United States significantly. But with its abundance came the pernicious pull of materialism. When he and his wife did missionary work in other countries, they found that not only did they not need much, but they hardly needed what they did have.

“There wasn’t the pressure to have and accumulate like we have here,” he said. “And sometimes, we don’t even realize that we’re living under that kind of pressure.”

After coming home from Honduras, Robinson pastored at a church in Iowa for 18 years.

On a completely different note, Robinson brought up pickleball. It was through that sport being played at Shawmut Church of the Nazarene, which Robinson attends, that program chair Don Cleveland met Robinson and invited him to speak at the Lions Club. Robinson is now Cleveland’s pickleball coach. Robinson said that pickleball is good for fellowship, exercise and meeting new people, and it’s a sport anyone can do at their own pace.

“We have a few people from the community,” he said. “We’d love to have a lot more.”

Pickleball is played at Shawmut Church of the Nazarene’s Family Life Center on Tuesdays from 5 p.m. to 8 p.m. Anyone is welcome to attend.

Robinson is now living his dream of being an artist. On display at the meeting were three of his drawings he had done with white charcoal on black paper.

“I do all kinds of artwork — oils and acrylic and watercolor and pastels,” he said. “In fact, I teach courses over at our church on Saturdays and Mondays.”

At an art show in Valley, Robinson won first place for best of show.