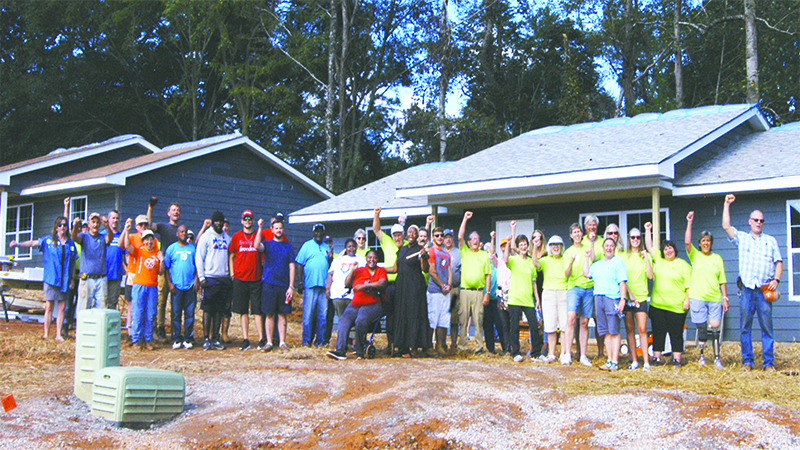 AND THEY ALL SAID “O-YEA!”: Volunteers who labored through four days of rainy periods got one fair day on Friday as two new Chattahoochee Fuller Center homes were dedicated on Higgins Street in West Point. There’s still some work to do before the two families can move in, but most of the work is complete.

WEST POINT — On Friday, Chattahoochee Fuller Center Homes No. 65 and 66 were dedicated in 11:30 a.m. ceremonies outside the newly-built houses on Higgins Street. A large crowd was present to witness golden hammers, family Bibles and the keys to the home being presented to new homeowners Latrisha Finley and Rita Rowland.

There’s still some work left to do before the families can move in, but they should be in their new homes before the coming Thanksgiving and Christmas holidays.

The large gathering outside the two new homes included many volunteers who had been working hard since Monday to get the homes built. Friday was the only day of the week when it didn’t rain.

Speaking at the ceremony, Fuller Center President David Snell said that to get these houses this close to being finished was miraculous, given the wet, soggy conditions everyone had been working in.

“This has been a challenging week,” he said. “A miracle has happened to have what we all see here today.”

CFCP Executive Director Kim Roberts credited the progress to dedicated volunteers and excellent leadership from the house captains and co-captains. A.J. Jewell was the captain on Home No. 65. His co-captains were Bryce Kujat and Doug Stephens. Barry Stuck was the house captain and Mike Dressler the co-captain for No. 65. A group of 17 members of the Bunkertown Brethren Church in central Pennsylvania came down to work on the house. They left early Friday morning on an 18-hour trip back home and missed the dedication ceremony. No. 65 is the new home for Rita Rowland and her two children, son Jaylin and daughter Asia. She’s a 14-year veteran of the U.S. Army.

Rowland fought hard to hold back the tears when a woman from Tucson, Arizona was introduced to the crowd. Her name is Mimi Crowley, and she raised $60,000 to cover the costs for the new home. She raised the money to honor her late husband Bob Crowley, who died this past year.

“I especially wanted this home for a veteran,” she said. “Those who have served our country were close to his heart.”

The Crowleys were long-time supporters of Habitat for Humanity and, later on, the Fuller Center for Housing. When Millard and Linda Fuller left Habitat in 2005, they went through some soul searching on how they would spend the rest of their lives. The Crowleys invited them to visit them in Arizona and to take a week-long rafting trip down the Colorado River. It was a relaxing time for them and helped point them in the direction of starting the Fuller Center.

Mrs. Crowley was especially pleased to see a plaque at the front door. It reads: “The House That Love Built To Honor Bob Crawley, 2021. The Fuller Center for Housing.”

She said that Linda Spofford’s mother, Bette Schrage, came up with the idea. Former residents of the local area, Spofford and her husband Barry today live in the Tampa, Florida area. They were in West Point this week doing volunteer work on The House That Love Built.

Mrs. Crowley was accompanied to the dedication ceremony by her two sons, Bob Jr. and Mark.

“My husband could do anything,” she said. “Next to his picture in his high school yearbook was the expression ‘Nothing is impossible for a willing heart.’ That was so true of him.”

“When people ask me about building houses for the Fuller Center, I always correct them,” he said. “We don’t build houses; we build homes.”

In a lighthearted moment, Linda Fuller Degelman told the crowd that the first thing she looked for when she arrived on the work site Friday morning was their shoes.

“Those who had been working this week had to have muddy shoes,” she said.

She recognized former CFCP President Bill Scott in the crowd and thanked him for being an early supporter of the Fuller Center.

“I remember when Millard and I came here in 2006 to discuss with local leaders the idea of forming a local chapter in the Chattahoochee Valley. That night, Bill Scott told us he was all in on that idea. Here we are now 66 houses later.”

There was a loud response of that cheer the Fuller Center is famous for.

There was another loud cheer when Latrisha Finley’s young daughter Asia opened the front door of their new home with the keys they’d been presented.

David Snell said he wanted to thank Mimi Crowley for giving him a new lease on life with the example she had set in sponsoring a Fuller Center home.

“This has been a trying, but incredible, week,” he said. “Our Fuller Center Bicycle Adventure will be here next week to help finish work on these houses. I think it will be done in short order. Rita has promised to make us a pecan pie when we come back. We’ll definitely come back for that.”

Snell said a special thank you to Barry and Amy Stuck and their group from Pennsylvania.

“They all are about teamwork,” he said. “We appreciate all of our volunteers. Some came all the way from California to work here this week.”

Finley said that her new home would always be a welcoming place for anyone who took part in having it built.

“I am just so thankful to all of you,” she said.