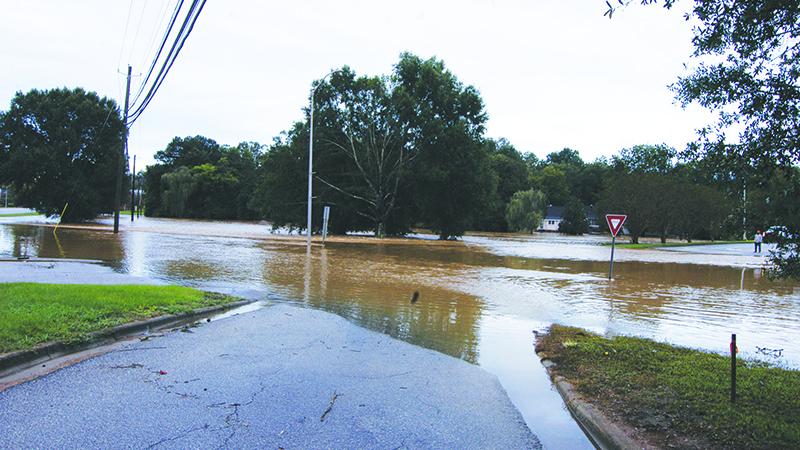 HUGULEY — An excessive amount of rainfall that has fallen over the local area in the past 24 hours has caused some flooding in low-lying areas. People are advised to be extremely careful if they have to be out on the road today.

“We have numerous roads and bridges that are currently impassable countywide,” Chambers County Emergency Management Agency (EMA) Deputy Director Kathy Hornsby reported Tuesday morning. “Most have been barricaded. While the water will recede as the rain lightens, we will remain under a flash flood watch until 7 a.m. CDT (8 a.m. Eastern) on Thursday. The same roads and bridges, and possibly others, could easily become impassable again. There is a trailing track of rain that has been causing flash flooding in repeated sequences. It’s primarily affecting the counties in central and southeast Alabama.”

Hornsby said more rain was in the forecast.

“On and off again, we will continue to have heavy rainfall,” Hornsby said. “Some will be embedded in storms, and even when the rain isn’t heavy, the lighter rain will remain unrelenting.”

Hornsby wants the public to know that any possible local flooding is not related to water releases from West Point Dam.

“The flooding is strictly caused by the enormous amounts of rainfall in short periods of time that has taken place repeatedly,” she said.

According to one report, the Lanett area received an estimated five-and-a-half inches of rain over a two-hour period early Tuesday morning.

In addition to lots of water on the roadways, patchy fog early this morning was a another factor hampering driving conditions.

Hornsby reminds people who are driving in such conditions to remember the expression “turn around, don’t drown.”

“Never drive around barriers blocking a flooded road,” she said. “You can’t see the road ahead of you. For all you know, it may have collapsed under all that water. A mere six inches of fast-moving flood water can knock over an adult. One foot of such water can carry away SUVs and trucks, much less small cars. It is never safe to walk or drive into flood waters.”