Jamie Heard sworn in as new mayor of Lanett 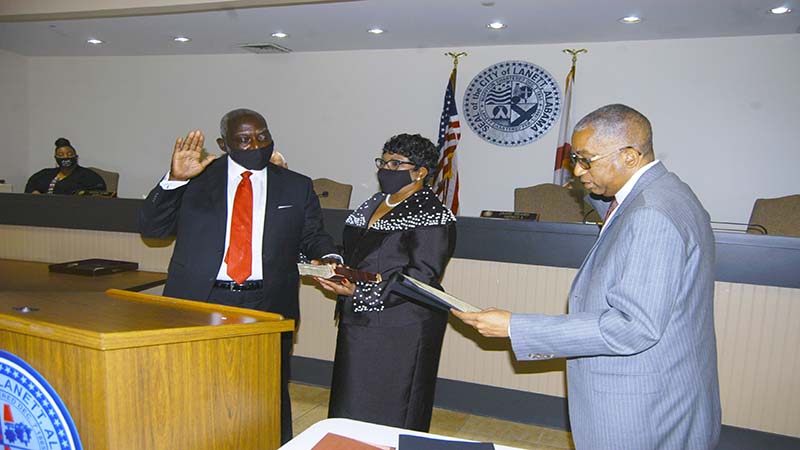 LANETT — Jamie Heard is the new mayor of Lanett. He was elected in a unanimous vote of his fellow council members at Monday’s city council meeting and sworn into office by City Attorney Stanley Gray.

Heard succeeds Kyle McCoy, who was removed from office by the state attorney general’s office after pleading guilty to two felony ethic violations on Sept. 22.

Gray had reviewed the process of selecting a new mayor in a recent council meeting and at a work session.

The unanimous election drew loud applause and a standing ovation from a large crowd gathered inside the council chamber at city hall.

“I want to simply say ‘Thank you for trusting me to lead this city in the right direction and in a positive manner,” he said. “I am grateful for this opportunity to serve, and it is my prayer and goal to build the trust of the citizens of this great city.”

In his time as a council member, Heard said that he had developed great working relationships with two previous mayors, the late Oscar Crawley and McCoy, and present and previous council members.

“I look forward to continuing to work with council members. We are a team. In order to be a successful team, we must work together to move the city in the right direction,” he said.

Heard said that Lanett was divided into five council districts, each with needs and some needing more than others.

“I will be meeting with each council member to discuss needs for their district and to come up with a plan to meet some, but not all, of the needs of each district,” he said.

Heard pledged to be transparent and to have an open line of communication with city residents.

“I will return all calls in a timely manner,” he said. “I may not give you the answer you want, but I will return your call.”

The new mayor said he realized he was no stranger to the majority of all Lanett residents.

“I worked for the Lanett City School System for 26 wonderful years,” he said. “I had a great relationship with the administration, faculty and staff of W.O. Lance Elementary School along with the parents and students.”

The school and the Lanett system have been financially sound for a long time.

“That’s the way it was when I retired on Dec. 1,” he said. “It’s my present goal for the city to remain financially sound.”

The one regret Heard had about Monday’s swearing in was that his parents didn’t live to see it.

“I know if they were alive, they would be so happy and would say ‘That’s our baby!’” he said. “I have siblings, other family members and friends who have gone on who would have been very happy to have seen this day. A cousin of mine, Mrs. Jessie Lee Martin, greatly supported me. She was always in attendance when I was being recognized for something. Sadly, she passed away on Thursday, but if she was here today, I can assure you she’d tell me, ‘Boy, don’t go up there and mess up our money.’”

“Finally, let me say thank you to my wife Janice, my children and their families, my brothers and their spouses, other family members and my church family for supporting me and encouraging me to serve,” Heard said. “Thanks to Mrs. Phyllis Stiggers, Mrs. Tamicha Davis and Mrs. Gwen Harris-Brooks for their daily calls encouraging me and providing me with helpful information. Again, thank you all. I look forward to working and serving with each one of you on the council and in the city. May God bless the City of Lanett.”

Council Member Charles Looser said he was glad to see a former fellow administrator in the Lanett school system to be the new mayor.

Council Member Angelia Thomas thanked citizens for turning out in big numbers for the meeting.

“I think Mr. Heard will be a great leader for us over the next four years,” she said. “Let’s keep holding our heads high. We have gone through a difficult time, but we will get through it.”

Council Member Tifton Dobbs pointed to Heard’s lengthy experience as a school administrator as an asset for the city. “I will be praying and working with you,” he said.

Dobbs drew some good-natured laughter when he talked about the Mount Hermon delegation in the crowd.

“Tell your church family we will be counting on them to be at our future council meetings,” he said to Heard.

Heard’s term runs until Nov. 20, 2025. The council must now look for someone to succeed Heard as the council member for District 2. They could decide that in a similar manner to what they did Monday at the next meeting on Monday, Oct. 18.