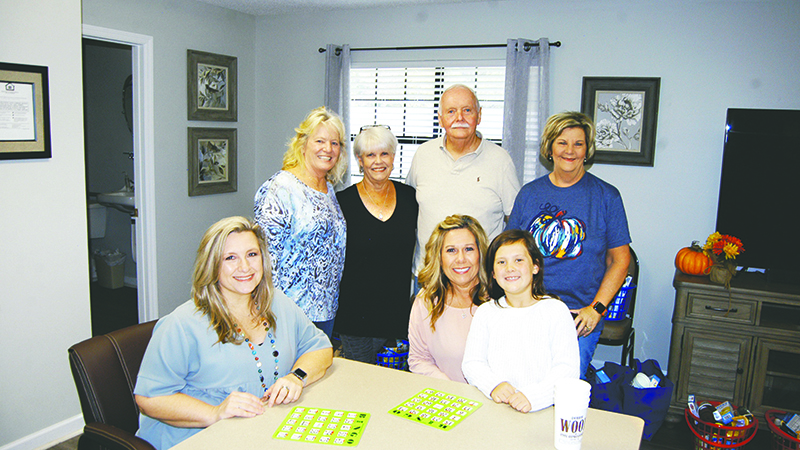 Hosting a fish fry: Members of the Kiwanis Club of Valley treated residents of Sylvia Word Manor to a fish fry late Thursday afternoon. Seated, from left, are Yvette Pritchett and Tammy Merritt with granddaughter Harper Hudmon. In back, left to right, are Julie Wood, Patsy McKenzie, Henry Bledsoe and Bobby Ann McCollough.

Sheriff Sid Lockhart cooked the fish, and a large number of Sylvia Word residents gathered for bingo and a meal. Those who preferred staying inside their apartment units were given fish plates at their door.

The fish fry had been scheduled months in advance. By coincidence, it fell on Clarence Barber’s 90th birthday. He’s a resident of the manor and was present at the event. He won a large gift basket and a t-shirt playing bingo and was given the first slice of a huge birthday cake.

“My family and I were originally from Dadeville,” he told The Valley Times-News. “We moved to Fairfax in the late 1940s, and I graduated from Valley High. I married a Lanett girl and our children went to Lanett schools. I have had a good life here in the Valley. I worked for WestPoint Pepperell’s community service for 23 years.”

“I guess you could say I cleaned up at bingo,” he said.

All the participants won something at bingo. Many of them won the big gift baskets. Others won t-shirts, Yeti tumblers and headphones.

“We wanted to fill the gift baskets with items that would last them a long time,” said club member Tammy Merritt. “Each basket had food items such as spaghetti and spaghetti sauce, cookies, soup, towels, dishwashing detergent, pens and koozies. These items were donated by members of the club and some local banks. We want to thank the banks for helping us with this.”

Located in the heart of Valley, Sylvia Word Manor is a housing community for those who are 62 years of age or older. It is managed by SPM of Birmingham. Tracy Johnson is the site manager and Shain Lott the service coordinator.

When the complex was built in the 1980s, five local entities joined together to help sponsor Sylvia Word Manor. They are the Baptist churches in Shawmut, Langdale and Fairfax, the Kiwanis Club of Valley and the Valley Lions Club. They contributed money to have it built and have supported it ever since. A member of each one of those entities serves on the Sylvia Word Board of Directors.

There are currently 48 senior residents living at Sylvia Word Manor. Maximum occupancy is 50.