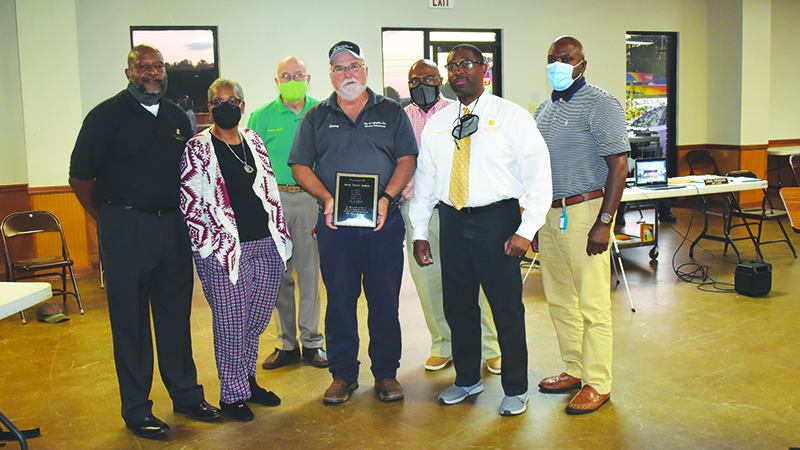 SAYING THANK YOU: Jimmy Jackson was recognized for 40 years of service to the City of LaFayette during Monday night’s council meeting.

At its Monday meeting, the LaFayette City Council formally recognized electric department employee Jimmy Jackson for his 40 years of service to the City of LaFayette. Jackson is retiring on Oct. 29.

LaFayette Mayor Kenneth Vines presented Jackson with a plaque and read it aloud.

“In appreciation of your 40 years of dedicated service, devotion, and commitment to the city of LaFayette, Oct. 25, 2021,” Vines said.

What Jackson has enjoyed most about his job is working outside, talking to people and helping people. He said the highlight of his career was probably transferring from the gas department to the electric department.

In his retirement, Jackson plans to maintain his yard service and gain more customers.

In other business at the meeting, Carolyn Wheeler, who’s been volunteering in the LaFayette city cemetery for 10 years, said a historic gazebo in the cemetery needed urgent attention.

She said that less than two years ago, the cemetery volunteer team noticed the foundation of the gazebo was giving way. She said the eight posts of the gazebo have rotted at the bottom.

“We do not have any money right now to do work to the gazebo,” she said. “We put a new roof on it, and the roof [has been] painted twice. So, we are asking for your help.”

Wheeler said she called 10 contractors/carpenters, who were all preoccupied with other projects.

“I had 10 excuses,” Wheeler said. “Either they didn’t answer the phone or didn’t return my call…”

City workers suggested a specific contractor to Wheeler, whom she called.

“He came right over to the cemetery to see what the problem was,” she said. “He and I met many, many times to see what we were going to have to do to repair the gazebo. He worked up a quote, and I understand he’s turned it into the city. This has been going on for months and months and months.”

Wheeler said that to the best of her knowledge, the city wouldn’t want to proceed with the project without getting more quotes. She argued that she had already called the ten contractors who wouldn’t help.

The gazebo, according to Wheeler, was built in 1903. She warned that if it wasn’t repaired soon, it could fall apart.

“It’s a very historical gazebo,” she said. “It really enhances the cemetery, and we don’t want to lose it. So, I’m just here to ask, can we hurry and get something done to the gazebo before it’s too late?”

Superintendent George Green of the LaFayette street, sanitation, and cemetery department said he was working on the issue.

Councilman Michael Ellis said it was his first time hearing about the issue and that it should have been brought before the council sooner.

“Well, the normal process is trying to figure out what we would need before we would come [before the] council,” Green said.

City Clerk Louis Davidson said its city policy to have three quotes for any project that costs over $100. He said the gazebo project wasn’t brought before the council because there weren’t enough quotes.

“It had one quote,” Davidson said. “George brought it to me. He was trying to get more quotes. So, we didn’t bring it before you guys because we didn’t have quotes. But from here on out, if that’s what you all want us to do every time we have a project, even if we don’t have enough quotes, we’ll push it out to you so that you all are aware of it.”

Ellis said he was tired of hearing about things “way after there’s been a problem” and emphasized that he’d like for such problems to be brought before the council sooner.

Also at the meeting, Chambers County School District Superintendent Casey Chambley asked the council to consider having the city acquire Vocational Drive, which leads up to the Chambers County Board of Education. He said the road was in dire need of repair and that the school district would fix and maintain it initially. Fifteen years later, the city would take over maintaining it. The road is currently owned privately by a family, and the board of education is in the process of acquiring the deed for it. Chambley proposed that the road be made a public access road. Councilman Toney Thomas argued that the city already had enough roads to deal with. In response, Chambley emphasized that the city won’t have to maintain the road in any way for years. Thomas responded that Chambley may want to talk to the next administration about the issue.

City Attorney Joseph (Mac) Tucker said he was looking into the legal aspects of the city acquiring the road.