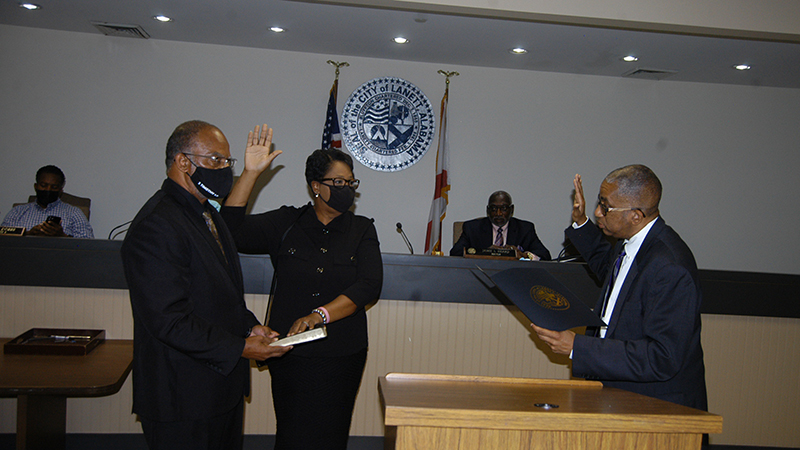 New council member: On Monday, Tamalita Dunn Autry (at center) was sworn in as a new council member in Lanett. City Attorney Stanley Gray (at right) administered the oath of office. Standing beside Autry was her husband, the Rev. Leonard Autry.

LANETT — Tamalita Dunn Autry is the newest member of the Lanett City Council. She will fill the remaining unexpired term of Jamie Heard, who was sworn in as the city’s new mayor on Monday, Oct. 4.

Both Heard and Autry were named to their positions in unanimous votes of the council.

“We are glad to have her on the council,” Heard said. “I know she will do a good job.”

“All of you folks in District 2 can stop calling me now,” he said, bringing down the house with laughter.

Since early this month, Heard has gotten all kinds of advice on who his successor should be in District 2. When the floor was open for nominations on Monday evening, Autry’s name was the only one mentioned.

Autry is a teacher at W.F. Burns Middle School in Valley. The school gym is named in honor of her father, Arthur Dunn, a former teacher and coach at W.F. Burns (then Valley Junior High) and Valley High. He’s also a former member of the Lanett City School Board.

Autry thanked Heard and members of the council for their confidence in her. She also thanked a large number of friends and family members for being in attendance for her swearing in.

“I want to do the very best job I can do in representing the people of my district,” she said. “I will plan my work and work my plan.”

That last statement drew smiles from a lot of people in the council chamber. It’s an expression made locally famous by her late uncle, former Chambers County Commissioner Ross Dunn.

Heard and members of the council took turns congratulating her on being a new council member.

“I congratulate you Mrs. Autry on this new position,” said Council Member Angelia Thomas. “It’s good to have another woman on the council to keep these men under control.”

Council Member Tifton Dobbs congratulated Autry on her being named to the office. He also thanked city workers for the job they did during a recent round of bad weather.

Dobbs called on city residents to be fair and to give the new mayor a chance to lead. He said he liked what Heard had said about prioritizing street paving according to need.

“We need to fix the worst streets first,” he said.

Council Member Charles Looser thanked the men of the city’s electrical and street departments for what they did during a really bad storm the first week of this month.

There was flooding in low-lying areas of the city during a late-night storm most people slept through. The bridge over Moore’s Creek on South 8th Avenue was closed for some time after the storm but recently reopened to traffic.

Council Member Thomas urged city residents to keep their yards looking neat and to place yard debris by their curbs. “Hopefully, we will become tidier as we go along,” she said. “We need to get our street sweeper working again.”

In action taken at Monday’s meeting, a resolution was approved to purchase a $245,000 ambulance with American Rescue Plan funds. At the outset, the new ambulance was going to be purchased from Frazer Ambulance Company of Houston, Texas. Since they have a huge backlog of order requests, the ambulance will be purchased at the same amount from another vendor.

Lanett Fire & EMS Chief Johnny Allen explained this situation to the council and said the city could get the needed equipment in much less time this way.

The council approved a resolution to participate in the upcoming Severe Weather Preparedness Tax Holiday, which will be taking place from 12:01 a.m. on Friday, February 25, 2022, until midnight on Sunday, February 27, 2022.

Another proclamation approved by the council recognizes October as Breast Cancer Awareness Month and commends organizations such as Team W.H.I.P. for what they do in promoting this cause.

Narfunda Ross accepted a copy of the resolution on behalf of Team W.H.I.P., which stands for Working to Help those In Pink.

Ross said that Team W.H.I.P. is partnering with FORGE of Birmingham, in recognizing the need of mental counseling as an important factor in surviving breast cancer. Ross said mental counseling is this year’s theme for Breast Cancer Awareness Month.

Team W.H.I.P. will have a walk to honor breast cancer survivors this month. It will be held with social distancing and will go from the fountain in downtown Lanett to Cherry Drive and back. It starts at 8:30 a.m. Saturday.

Heard said he was pleased to announce that the city has a new senior center director. Sandra Thornton is succeeding Tammy Hollis, who recently retired. Thornton is a resident of West Point and a member of the West Point City Council. She’s also the reigning Ms. Senior Georgia and sister of Lanett City Clerk Deborah Gilbert.