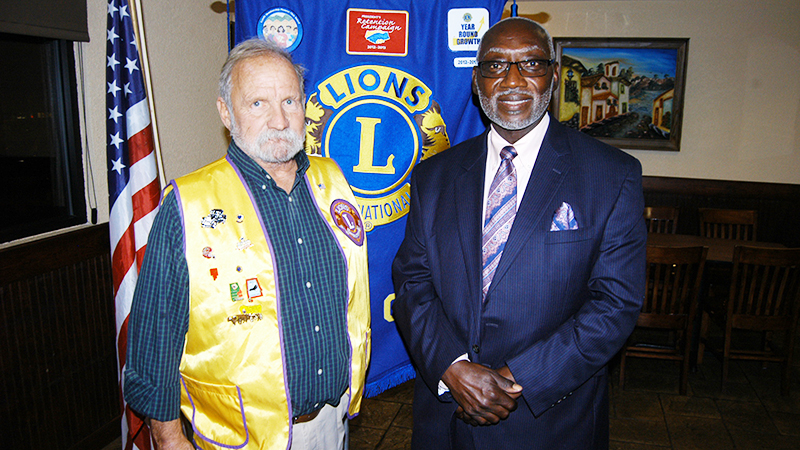 New mayor speaks: Jamie Heard (at right) was the guest speaker at the Monday evening meeting of the Kiwanis Club of Valley, held at San Marcos Mexican Restaurant. He said that he’s a quiet person by nature but will be doing a lot more talking now that he is the mayor of Lanett. He was sworn into office on Oct. 4. At left is Phillip Sparks, club president.

VALLEY — Mayor Jamie Heard told members of the Valley Lions Club at their Monday meeting that he never dreamed of being mayor before this new responsibility was thrust upon him.

“I didn’t even know I was mayor pro-tem,” he said to some well-intentioned laughter.

A retired school administrator, Heard works part-time for Davis Memorial Mortuary in Valley. “We had a funeral one day, and when I got back I had some messages to call city hall,” he said. “I was told that it had gone down with Kyle (McCoy) and that he was no longer mayor,” he said.

He then recalled a private conversation he’d had with McCoy several months previous.

“He asked me if I’d like to be mayor one day,” Heard said. “I told him I didn’t think it would ever happen, and he told me to be thinking about it.”

When Heard realized that the opportunity had come, the first thing he did was to pray for guidance.

“I asked God for a sign that he wanted me to do this,” he said. “He did that, and I told him I was willing to serve.”

Heard has the gift for being a good listener and making those around him feel comfortable. It’s something he acquired in 26 years of being a principal for the Lanett City School System. He retired one week before Christmas Day in 2020.

He said that Superintendent Jennifer Boyd had recently joked with him about not being much of a talker.

“She kidded me about being a mayor and not talking much,” he said.

Heard is the youngest of eight children raised by Jack and Emma Heard in the West Shawmut community. His dad ran a taxi service and his mom worked in the lunchroom at Shawmut School. Jamie is one of the couple’s three children who are still living. He and wife, Janice, have three children and six grandchildren, the youngest of which is seven months old.

Heard graduated from Valley High in the 1970s and went on to earn degrees from Southern Union State Community College, Auburn University and Troy University. He’s a long-time member of Mount Hermon Baptist Church, where he is a member of the board of deacons.

“I love my church family,” he said.

Heard said that he has a lot to learn about the procedures involved in being mayor. His recent retirement as an educator gives him time to devote to the office and to become familiar with the daily responsibilities of the job. Even though the pay might not be that of a full-time professional position, being the mayor of a city of 7,000 people is a full-time position with much responsibility.

“I am always open to questions,” Heard said, making the point that he is there to serve the citizens.

He said his first goal is to continue paving city streets, based on a worst streets first priority. He said he’d be looking at making sure city employees were in a position to best serve the city.

“We will be identifying the strengths and weaknesses of each department,” Heard said. “We want to make sure their skills are best utilized in the department they are assigned to.”

Heard is fully engaged to do the best job he can for Lanett.

“I want the people of Lanett to know I will be trying very hard to make Lanett a better place to live,” he said. “Hopefully, we can get some new businesses here.”

He was out bright and early on Tuesday of this week at the new Guthrie’s in Lanett. He was the first person in line to be served and received a box of chicken fingers from Caitlyn Clark at the serving line.

He credited the former mayor on getting a lot of good things done in Lanett. He said he appreciated his work on the downtown streetscape, the airport project and acquiring the 25-acre former Lanett Mill site and annexing it into the city. That was key to Lanett getting the new Tractor Supply store.

Heard said he wanted to see these projects to a conclusion. The next phase of the streetscape will continue along First Street in 2022. Work should start when school is out of the summer in May.

The new airport should be in operation next year as well. A new 5,400-foot runway will be replacing one that was an estimated 3,165 feet in length. There’s lots of interest right now in renting hangar or tie-down spaces at the airport. The city will also be gaining revenue from the fuel sales that will be taking place there.

“It’s looking really good at the airport right now,” Heard said. “Anyone who gets the chance to see it should go there.”

Offices for the Chambers County Development Authority (CCDA) are located in the new airport terminal, which opened late last year.