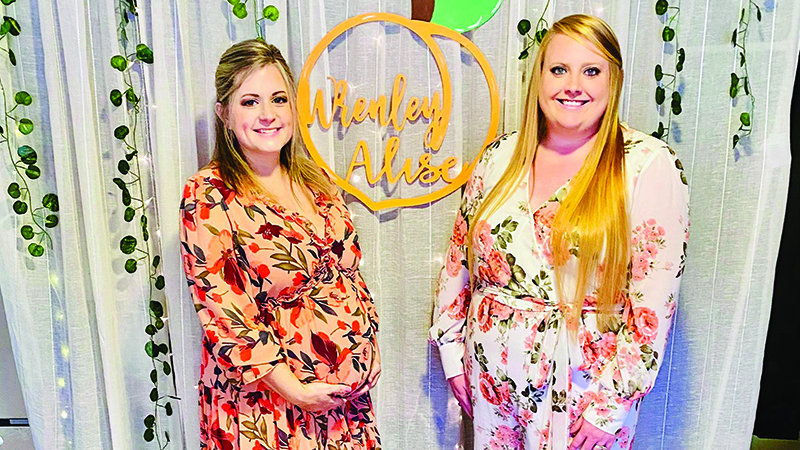 what a friendship: Mallory Parker (left) holds her baby bump at her friend, Amber Hogg’s (right) baby shower. Parker is acting as Hogg’s surrogate and is carrying her daughter, Wrenley, who is due in December.

When Amber Hogg leans down to caress and coo at Mallory Parker’s heavily pregnant belly, she is not cooing to a niece or even a potential godchild. She is greeting her own daughter, Wrenley Alise Hogg, due in December, whom Parker is carrying for Hogg and her husband, Daniel.

“[The baby] is Amber and Daniel’s, but Amber is the cooker, so to speak,” said Hogg’s mother, Susan Bailey.

Parker is acting as Hogg’s surrogate, a decision that has brought the two LaGrange women all the closer after several years of trials and tragedies.

Hogg and Parker’s friendship stretches well over 20 years, they said, and they have known each quite literally their whole lives. They were acquainted through their families during infancy and then grew up as friends and classmates at Long Cane Elementary School where Hogg now works as a kindergarten teacher. Parker is an emergency nurse at Wellstar West Georgia Medical Center, and the two have remained close as they’ve started to navigate through their own lives.

In their adult years, as Mallory and her husband, Justin, began raising their three children, Amber and Daniel were trying to have just one of their own.

“Me and my husband tried for several years but faced some issues with conceiving,” Hogg said.

It would take six years before she and her husband’s dream finally came true. In early 2020, they conceived a little girl, whom they named Harlow, and both families were ready to welcome her into the world.

However, fate had other plans.

Hogg, still wanting a family, began to look at other alternatives as she and her family grieved for Harlow.

Adoption was the couple’s first option, but the waiting period and extensive costs was improbable for them. The idea of surrogacy came next, and the Hogg’s began looking at probable candidates.

“I always felt a calling to help somebody in some way,” Parker explained. “I didn’t know it was through surrogacy… and I told Amber that I was always here [for her.]”

In January, the Hoggs had their first consultation for a surrogate, and Parker instantly thought she was the prime candidate.

“I didn’t know anyone else had offered,” Parker laughed.

“Mallory was a better candidate [due to her] age,” Bailey said.

The discussion was held between the two women and their husbands, and the plan was put in place. Parker began psych evaluations in February, followed by her first human chorionic gonadotropin, a form of hormone therapy that would ready Parker’s body for the Hogg’s fertilized egg.

Part of the process involved Parker and Hogg having to be stuck with hundreds of progesterone shots to enlarge Hogg’s eggs to make them easier to extract, Bailey explained.

“Two [eggs] were viable, and both were implanted, but only one made it through the full cycle,” she said. “It tricked [Parker’s] body into thinking it was pregnant before she was, because when they put [the egg] in, it was already a couple of weeks into the process.”

Parker would push through her discomfort, she said, adding that a C-section was already planned for the day of Wrenley’s birth. And on April 9, she finally received a positive pregnancy test.

“[Hogg] was in the middle of school, and I called her…and I said, ‘Amber, it’s positive” and she said, ‘Shut up.’ Her husband had the exact same reaction.”

To better help her children understand the situation, Parker bought them a book on how kangaroos carry babies in their pouches.

Now, the ten, eight, and four-year-olds look at themselves as Wrenley’s older cousins.

“I kind of planted seeds [in them] since the beginning,” Parker said. “I told them I might be one day carrying a baby for Amber. She’s their aunt. She’s been at every single one of their births. She’s been there through everything for me.”

The two live within a short car drive of each other, and Hogg has been on-call for all of Parker’s cravings and medical needs. Parker’s children are constant visitors and are always excited to see additions to Wrenley’s nursery. Some of the clothing that was supposed to be Harlow’s will be passed down to her, as well as a teddy bear bearing her weight and a blanket made by Parker’s grandmother.

“It’s crazy but this baby is due a couple of weeks after [the anniversary of] Harlow’s due date,” Parker said. “It’s really been a God thing from the beginning.”

Parker will be more than ready to hand her precious “niece” over to her parents in December, she said.

“Everybody kind of asks me how do I keep a separation…and I think from the beginning, seeing Amber and Daniel … I’ve been able to separate, and I just get to be Auntie Mal, and I get to have special bond with Wrenley. To be able to see a baby in her arms that she gets to take home and love, that’s going to make everything worth it.”

Wrenley will not only grow up surrounded by Hogg’s and Parker’s adoring friends, co-workers and family, but also a guardian angel, Hogg said.

“We have things in her nursery that have Harlow’s name on them,” she said. “She’ll always see it … we have [black and white] pictures of her…”

And on that long-expected day, Hogg has three little words to say to the little girl she’s wanted for so long.