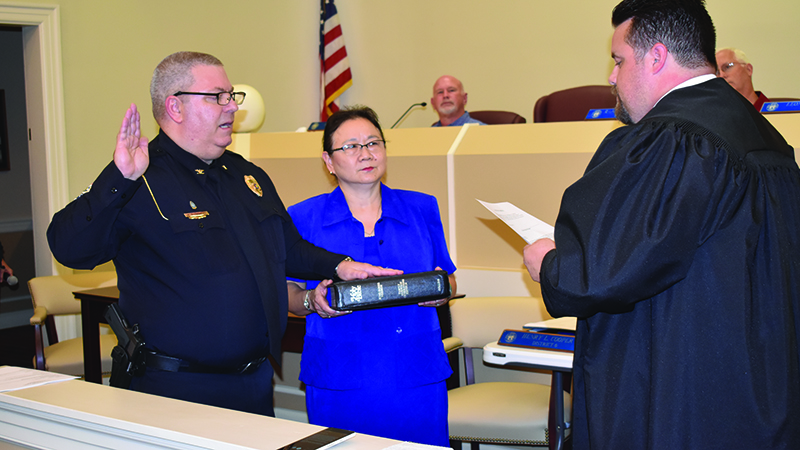 “I want to thank each of y’all for being here tonight, as this is a very momentous occasion, each time we’re able to swear in someone into service in the public,” Story said.

He thanked retired police chief Tommy Weldon and other members of law enforcement for the work they’ve done.

Story had Reynolds swear on a Bible that he would support the constitutions of the United States and Alabama, as well as faithfully and honestly discharge the duties of his new position.

“Thank you, mayor and council, for giving me this opportunity,” Reynolds said.

Valley Mayor Leonard Riley said he’d always been a big believer from within and that the city looked forward to working with Reynolds.

Weldon said in an interview that he and Reynolds had worked side-by-side since 2009.

“We’ve kind of worked as a team all those years, and he’s very deserving of this position,” he said.

“I’ve got seven grandkids to try to keep up with,” he said. “They’ll keep me busy.”

Reynolds said he’s still getting used to his new role.

“Even though we know it’s coming … being called chief is going to take some getting used to,” he said.

Reynolds’ wife, Debbie Reynolds, said she was very proud of her husband.

In other business at the meeting, the council accepted a $1,255,882 bid from Chris Clark Grading and Paving of Lanett for Phase II of a road resurfacing project. The roads to be resurfaced, according to a meeting agenda document, are 56th Street West, 27th Avenue, Fairfax Bypass from GFA to Givorns, Harmon Street, Jefferson Street, and MLK from Evergreen to 20th.

During the officer/department heads communications portion of the meeting, Reynolds said the Valley Police Department will be getting three new cars.

“They will already come pre-wired,” he said. “So all you have to do is the cost of dropping some radios and sirens into them. We won’t have to wait on any parts for those.”

Recreation Director Laurie Blount announced that there will be a fall festival on Saturday, Oct. 30.

“We are still looking for churches, civic groups, businesses to come hand out candy,” she said. A flyer outside the meeting said the festival will be a drive-thru in the Sportsplex parking lot from 6 p.m. to 8 p.m. EDT.

“This is the first year that we’ll have high school students swimming in sectionals,” she said.

She said sectionals would take place in Birmingham on Nov. 19

Riley called for a public hearing on Oct. 25 on rezoning property on the southeast corner of the intersection of Fairfax Bypass and Cusseta Road.