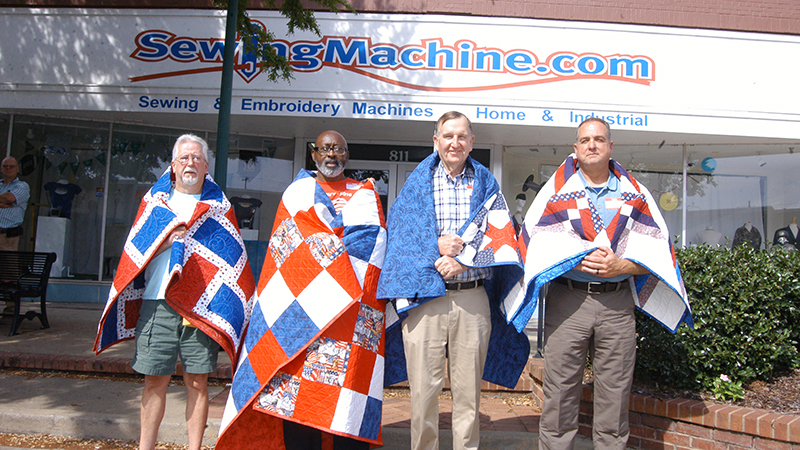 WEST POINT — On Saturday morning, three U.S. Army veterans and one veteran from the U.S. Air Force were honored for their service by the Georgia-Alabama State Line Chapter of the Quilts of Valor.

In a ceremony taking place at sewingmachine.com in downtown West Point, Army veterans Jay Brice of Phenix City, Roger Bergh of Lanett and Michael Summers of West Point, and Air Force veteran Bill Burrows of Valley each received a Quilt of Valor.

Burrows was in the Air Force for four years and with the U.S. Army Corps of Engineers for 33 years. He spent most of that time working in the powerhouse at West Point Dam.

During his service in the Army, Summers was stationed at many places around the world. He was in Oklahoma for a time and later in Korea, Panama and Germany. He’s back home in West Point and has gotten a new lease on life after having survived a tough battle with Covid-19 last year.

“It is a blessing to be alive,” he said.

A native of Tonasket, Washington, Roger Bergh was in the Army for 22 years and served in both the Vietnam War (1970-71) and Operation Desert Storm (1990-91). He and his wife today live in Lanett and very enjoy life in this part of the country.

Jay Brice is a native of Dallas, Texas. He was in the Army for 31 years and is a veteran of Desert Storm and Operation Iraqi Freedom. He now lives in Phenix City. Brice retired from the Army on Saturday and had a big celebration with his family and friends.

“We want to thank each one of you for your service to our country,” said chapter spokesperson Sheila Simpson. “We appreciate you being here in West Point this morning. West Point is a laid-back little town you just don’t see very often anymore. We are fortunate to have the Chattahoochee River, where you can go kayaking or canoeing, and West Point Lake, where it’s fun to go camping, boating and fishing.”

The ceremony began with the playing of a recorded version of a well-known song for each branch of service – “The Caissons Go Rolling Along” for the Army, “Anchors Aweigh” for the Navy, “Semper Paratus: We’re Always Ready for the Calm” for the U.S. Coast Guard, “Off We Go Into the Wild, Blue Yonder” for the Air Force and “The Marine Corps Hymn” for the U.S. Marines.

It took Roberts’ small group some three years to make and award 100 quilts, but as word spread about what they were doing, chapters started organizing all over the U.S. In May 2014, the 100,000th quilt was presented. Since then, the number of presentations in the U.S. has surged past the 270,000 mark. It now stands at 279,505.

The local chapter has made a special effort to award quilts to veterans of World War II and Vietnam. Those Americans who came of age during WW II have often been called “the Greatest Generation.” Precious few veterans of that war are still living.