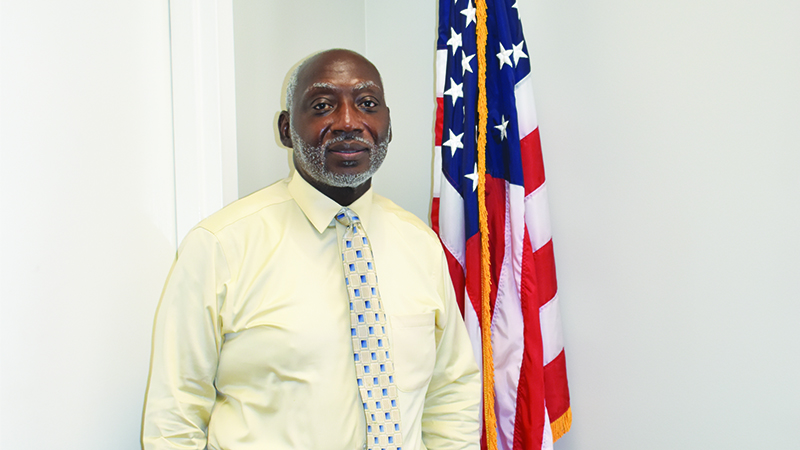 SETTLING IN: Lanett’s newly appointed mayor, Jamie Heard has hit the ground running after being appointed on Monday, Oct. 4.

On Tuesday, the recently sworn-in mayor of Lanett, Jamie Heard, shared his plans for his new position and thoughts on how things are going in the week since he’s taken over.

Heard said his transition from District 2 council member to becoming the mayor has gone smoothly.

“I’m getting my feet wet, trying to learn the different departments, and trying to meet all of the employees,” he said. “So far, it’s been good.”

He said he plans to continue projects former Mayor Kyle McCoy worked on, such as improvements to the Lanett Municipal Airport and beautification projects on North Lanier Avenue and First Street.

He explained the airport project.

“We’ll be looking at hangers,” Heard said. “We may put a fuel tank out there. We’re going to add to the runway.”

Heard said that having planes get their fuel at the airport would bring revenue to the city.

As for the beautification projects, he said they involved paving the streets and creating sidewalks.

He said he plans to pave other streets in the city.

“Each council member will submit a list to me of streets in their district,” he said.

“My goal is to be transparent, work with each department, be accountable to the citizens, have an open-door policy where citizens can come in and talk to me,” he said. “My job is to manage the city and make sure it is run right.”

Being so new to his role, Heard said he hasn’t faced any challenges yet but anticipates facing them in the future.

He said there’s nothing about the position he’s nervous about, as being an elementary school principal for 26 years and working on the city council have prepared him for his new role.

Heard said he never had a desire to be Lanett’s mayor, but “quite a few citizens” asked him if he’d consider accepting the position.

“And I prayed about it, and then things just started falling in place,” he said. “I had the support of the council members. They felt like because of my experience at the school, I had the skills for the job.”

Heard said people have responded “very positively” to him becoming the mayor.

“I’ve had citizens come out and talk to me, and they welcomed me wholeheartedly,” he said.

Heard’s term will run until Nov. 20, 2025. The council must now find someone to succeed Heard as the council member for District 2.

They might vote on the new city council member at their next meeting on Monday.