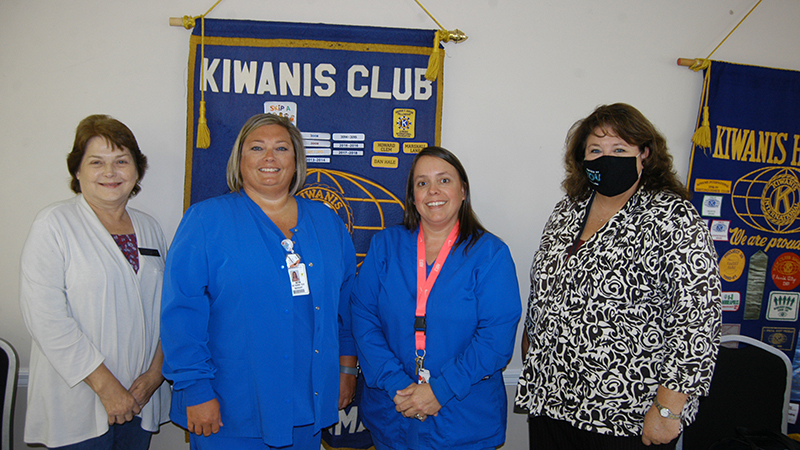 TALKING ABOUT NEW EQUIPMENT — As a special program during Breast Cancer Awareness Month, the Kiwanis Club of Valley on Wednesday hosted a presentation on some new mammography equipment at EAMC-Lanier. Mammo techs Beth Sheppard and Ashley Jackson talked about a new 3-D imaging machine that has gone into operation. It cuts down on waiting time and provides faster results than the conventional two-dimension machines. From left, are Debbie Yates, club president; Sheppard and Jackson and Karen Bennett, program chair.

VALLEY — EAMC-Lanier Hospital has a new 3-D mammogram machine. It has replaced a conventional machine that was 12 years old and offers local women access to some advanced technology. The new machine has been proven to detect between 20 and 65 percent more invasive breast cancers compared to the two-dimensional machines.

Mammogram technicians Beth Sheppard and Ashley Jackson talked about this at Wednesday’s noon hour meeting of the Kiwanis Club of Valley.

“We are excited about this,” Sheppard said. “It has taken us six months to get it up and running. There’s more functions for us to do with it, but it’s the kind of technology we have been waiting a long time to offer. We are so pleased to now offer 3-D mammography screenings at EAMC-Lanier.”

3-D mammography, explained Sheppard, is an imaging procedure in which an x-ray moves in an arc over the breast, taking multiple images from different angles. These three-dimensional pictures are synthesized by a computer into thin, one-millimeter images, making it easier for doctors to see tumors. It reduces the chances of a doctor seeing a false positive. This has resulted in the reduction of callbacks by an estimated 40 percent.

“We were one of relatively few hospitals in the east Alabama-west Georgia region without a 3-D mammogram machine,” Sheppard said. “It was time for us to get one.”

When the staff is up to speed on the use of the machine, they should be able to space appointments 20 minutes apart from each other.

“Most insurance companies, including Medicaid and Medicare, cover both 2-D and 3-D mammography,” Sheppard said.

“What happens when the radiologist finds something on a mammogram?” Sheppard was asked.

“You will be contacted to set up further evaluation at the Breast Health Center in Auburn,” she said. “There, they will perform any additional imaging or biopsies. The breast health radiologist, Dr. Lorino, will then follow up with you or your physician.”

“Thank you for allowing us to visit with you today and to let you know about the exciting new equipment we have been waiting for for so long,” Sheppard added. “If you are in need of your mammogram, be sure to call the imaging scheduling department to get you on schedule. The number is (334) 528-1215.”

October is Breast Cancer Awareness Month. Healthcare workers are spreading a message of hope that more and more women are surviving breast cancer. The key is to find it early, and the best way to do this is to have mammograms on a regular schedule. Women who are of average risk and who are between 50 to 74 years of age should get one every two years. Women who have a parent, sibling or child with breast cancer should start screening in their forties.

Breast cancer is a disease where cells in the breast grow out of control. They can then spread to other parts of the body.

Warning signs of breast cancer include: having a new lump in the breast or armpit area; the thickening or swelling of part of the breast; Irritation or dimpling of the breast skin; Redness or flaky skin in the nipple area or breast; Any change in the size or shape of the breast: and pain in the breast.