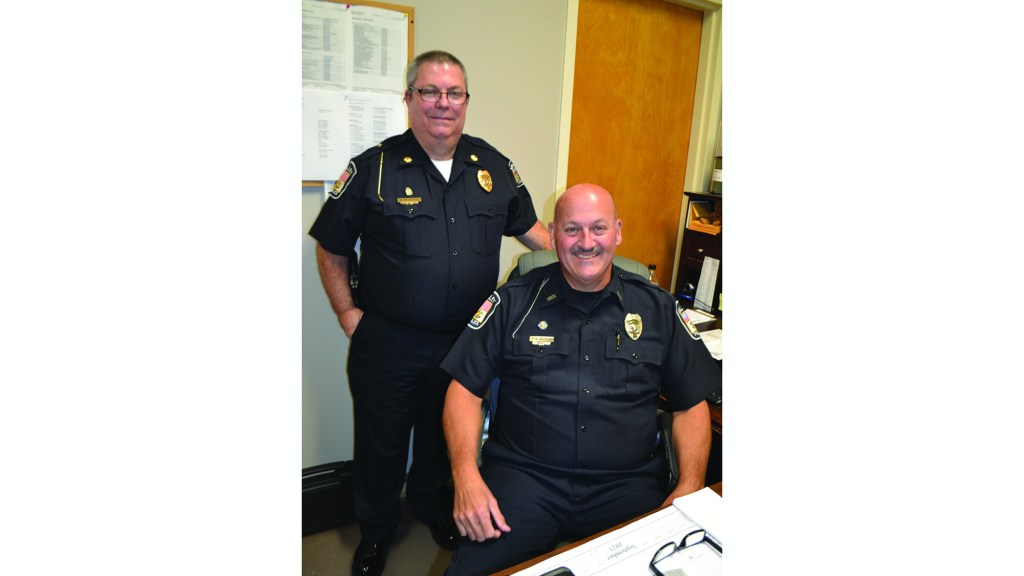 FINAL DAY ON THE JOB — Valley Police Chief Tommy Weldon (seated) had his final day on the job on Thursday. His retirement became effective at the end of the day. His successor, Mike Reynolds (standing), is no stranger. They have had adjacent offices at Valley Police Department for many years now. Weldon is expecting a smooth transition. “We have been discussing this and planning for this for a long time,” he said.

VALLEY — Thursday was a normal work day for Tommy Weldon, even though it was his final day as the police chief for the City of Valley. His retirement after 36 years in local law enforcement became effective at the end of the day. His successor, Mike Reynolds, has been with the department for 33 years. He will be sworn in ceremonially at 6 p.m. Monday at city hall.

During the noon hour on Thursday, Weldon took part in a meeting to discuss the annual budget for the Chambers County Emergency Management Agency (EMA). He has been representing the City of Valley as an EMA board member for some time now. He will continue to fill out his three-year term on the board. He will also remain with VPD as a reserve officer, ready to help out when called on.

Weldon is leaving a department that he said is in good shape. It’s in full force with 28 full-time officers, three part-time officers and an administrative assistant. There’s also two new captains. Veteran officers Chris Daniel and Stacy Shirey were promoted to that rank at Monday’s meeting of the city council.

In his office at Valley Police Department Thursday afternoon, Weldon was in communication with officials in Louisiana on the extradition of two murder suspects back to Chambers County. Along with a third suspect who had been earlier arrested, the two men will face capital murder charges. None of the three were living in Alabama at the time of the July 17 killing.

“The two men who have been held in Louisiana will be extradited back here on Friday,” Weldon said.

Weldon said that he has really enjoyed working with Reynolds over the years. Their offices have been right next door to each other, and anytime Weldon has needed him for anything over many, many years, he was easy to get to.

Reynolds bears no ill will over a mishap that took place almost 30 years ago.

“Tommy was with the Chambers County Drug Task Force at the time, and I was with the SWAT team,” Reynolds recalls. “We had a search warrant to raid a house where multiple drug users were believed to be inside. I guess I was a little rambunctious to get out of the car.”

Reynolds was getting out of the police vehicle just as Weldon was easing up from behind. The left-front wheel accidentally pinned Reynolds’ foot.

“Luckily, it wasn’t that big of a deal,” Reynolds said. “I guess you could say I was a little more flexible back then. I just wanted my foot loose, so I could go to the house. We were able to arrest the suspects without incident.”

Weldon is musically talented. He loves to sing and play the trumpet. It’s never been a part of his official duties, but he has played that trumpet many times for lots of events over the years.

Weldon and his wife, Sharon are blessed with a large family. They have three grown children and seven grandchildren.

Reynolds and his wife, Debbie, have two grown children. Son Matthew lives in New Mexico and daughter Kimberly in Georgia. Matthew and his wife, Priscilla, have a baby daughter, Jocelyn, who celebrated her first birthday this week.