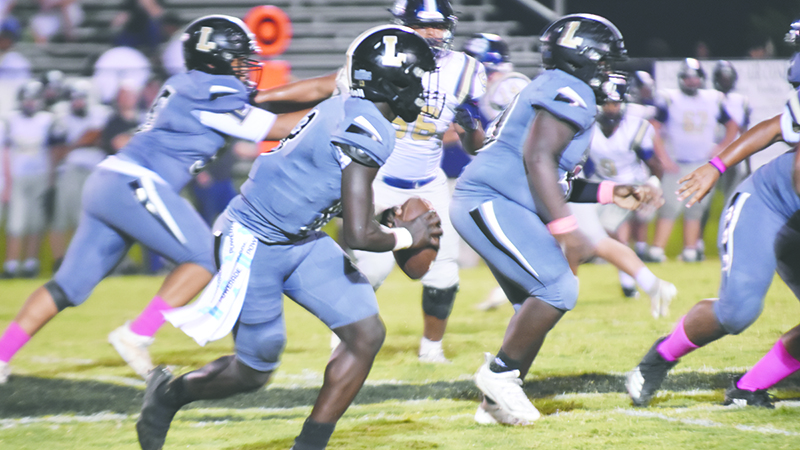 The Lanett Panthers clinched their fifth straight region title in a 71-8 drumming of Randolph County at Morgan-Washburn Stadium on senior night Friday. On the night, the Panthers scored on the first play of their offensive series six times, without their bell-cow running back, D’Quez Madden who did not play in Friday’s contest. It was unclear why Madden did not play.

The Panthers started off on fire, scoring on their first three plays from scrimmage. On the Panthers’ first play, quarterback Jarrious Goodman found Elijah Whitfield for the first score of the game and it was downhill from there. Lanett scored four touchdowns in the first quarter, taking a commanding 27-0 lead into the second quarter.

The second quarter started the same way as the first, but this time it was the Panthers’ defense getting involved. Tieko Williams picked off Randolph County and took it to the house, putting Lanett up 33-0.

The stifling Panthers’ defense had four interceptions on the night and made gaining positive yardage nearly impossible for Randolph County.

Lanett took a dominating 52-0 lead into the half.

With a running clock in the second half, the Panthers still managed to put up 19 more points, allowing Randolph County to find the endzone late in the half.  The game wasn’t without low spots, as the Panthers left two touchdowns on the field due to penalties in the second quarter.  The first was on an illegal shift and then a blocked punt was run into the end zone, but a blindside block and an unsportsmanlike conduct penalty nullified the play. Lanett travels to Horseshoe Bend next week to finish out its regular season.